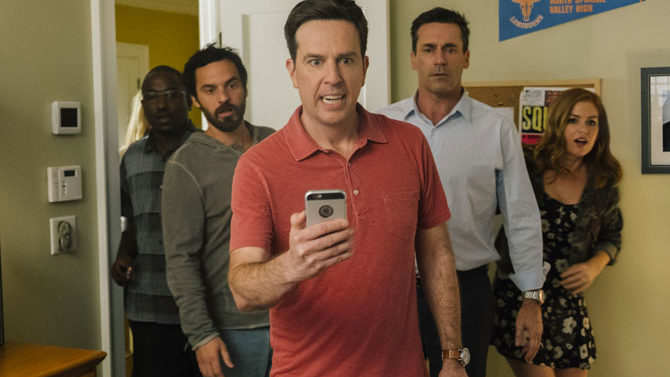 The expectations for a star-studded, high-concept studio comedy are not set that high. No one goes to movies like Tag—a going-of-age chuckler starring Ed Helms, Jon Hamm, Jake Johnson, Hannibal Buress and Jeremy Renner as a highly unlikely group of friends—looking for an artistic revelation. Is it funny? Will I be entertained, to paraphrase Maximus? “Um, sure” is the answer, and that is absolutely OK, especially considering how unpleasant and unfunny many big Hollywood laughers can be. No one may be able to explain how someone could have cast this quintet as lifelong friends, but everyone’s comic skillsets mesh approachably.

Screenwriters Rob McKittrick and Mark Steilen work way too hard to cobble together a traditional narrative out of Russell Adams’ Wall Street Journal story “It Takes Planning, Caution to Avoid Being It,” about a group of grown men who had been playing a game of tag for over 20 years, when a more episodic “Jackass” format would have fit perfectly. Imagine Tag starring Johnny Knoxville and company playing real games of tag in the middle of a mall or hospital or wedding reception; that movie has transcendent potential à la Bad Grandpa. A globetrotting game of tag staged as an It’s a Mad Mad Mad Mad World cameo-fest where the guys keep showing up to tag each other in the most unexpected of places would also have better used the cinematic potential of a lifelong game of tag than this Stephen King-ish tale of camaraderie where the terrifying clown is replaced by a kids’ game.

Instead, father of an insignificant number of children Hoagie (Helms), conceited CEO Bob Callahan (Hamm), unemployed pothead Chili (Johnson) and their black friend Sable (Buress) plan to attend the wedding of their hostile pal, Jerry, who has never been tagged. While trying to catch Jerry, eternal child Hoagie learns that the quartet might not know their uncatchable fifth friend very well. Or at least that seems like it should be the last-act revelation of Tag. What transpires is much more mawkishly expected of these sorts of friendship comedies.

Fortunately, everyone besides Renner and his on-screen fiancée, Leslie Bibb, keep the game fun even when it should not be. Sure, Helms has the thankless task of playing the straight(est) man, which is boring, if expectable; Isla Fisher gets to have loads more fun as his intense wife, who is relegated to the role of observer. Hamm continues his successful transition from soulless ad man Don Draper to vapid funnyman, and it is becoming difficult to determine in which type he is better cast. Johnson ekes every ounce of laughs out of the movie’s creakiest character, while Buress snags MVP honors as he scores on every single comic attempt.

Unfortunately, Renner’s Jerry gums up the whole works. The actor is as mysteriously appealing as ever, and comes off way cooler than he did in Avengers or The Bourne Mumblemumblemumble. But Jerry is a bucket of cold water on Hoagie’s dream friendship. Apparently, no one knows he is a recovering addict, or even that he is getting married. It is like they are not even friends outside of tag. His fiancée, Susan, comes off even worse, though not in the expected evil fiancée way. The couple’s last-act deeds undercut the movie’s final scene, a bravura sequence that shows audiences how excitingly lively the entirety of Tag could have been. Had Tag gone in a couple of other directions, it could really have been a memorable big-screen comedy as opposed to simply another flick destined to lose its well-earned year’s-funniest-movie status sooner rather than later.