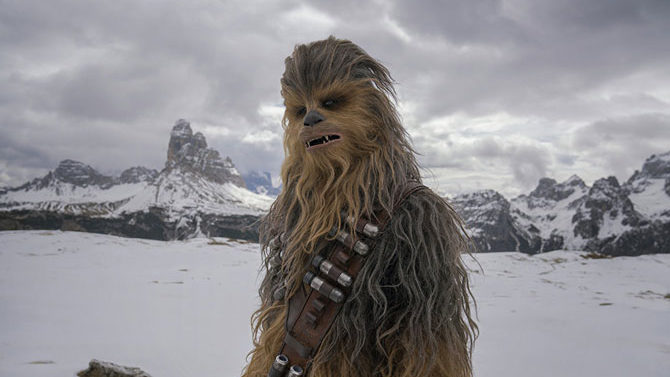 The newest entry in the now quickly-expanding Star Wars cinematic universe entertainingly reveals the superfluous origins of the franchise’s popular smuggler turned hero, Han Solo. After a troubled production during which original directors Phil Lord and Christopher Miller were replaced by the competent if uncreative Ron Howard, Solo never quite hits light speed, but it gets from one end of the galaxy far, far away to the other without running headlong into any wayward stars. “Surprising” is not a term one would use to describe this prequel; happily, “fun” is.

Once a wayward youth on his home planet of Corellia, where they build star destroyers, Han Solo (Alden Ehrenreich) yearns for the stars, much like A New Hope-era Luke Skywalker. But this Han is in love with a girl—a girl who is not a princess named Leia. Han’s first love was Qi’ra (Emilia Clarke from “Game of Thrones”), from whom he was separated prior to leaving Corellia. After a failed stint in the Imperial military, Han is reunited with Qi’ra on a criminal job that led to his famed Kessel Run in the Millennium Falcon. On the way, Han teams up with longtime partner Chewbacca and meets eventual pal and fellow smuggler Lando Calrissian (Donald Glover), who owned the Falcon prior to Han. Solo screenwriters Lawrence Kasdan—who contributed to The Empire Strikes Back, Return of the Jedi and The Force Awakens—and his son, Jonathan, also introduce Han’s shady mentor, Tobias Beckett (Woody Harrelson), and some ancillary Mad Max leftovers led by the masked Enfys Nest (because what is Star Wars without a masked adversary?).

Ultimately, Solo’s biggest flaw is a lack of the wondrous unknown that makes each Star Wars movie seem crucial and special. Ehrenreich is a perfectly charming Han-in-training, and Glover mimics Billy Dee Williams’ charm while giving us a brand new Lando. Composer John Powell strays too far from John Williams’ musical formula; at its worst, Solo barely sounds like a Star Wars movie. As much fun as it is to see Han’s meet-cute with Chewie, Lando and his beloved Millennium Falcon, the overall impact on the Star Wars universe is negligible. If Disney continues to expand the Star Wars universe at this rapid a pace, not every entry can have the importance of a new episode. It is OK for a Star Wars movie to merely be a fun blockbuster that enlarges our knowledge of a wider universe without shaking the foundation upon which it is built.