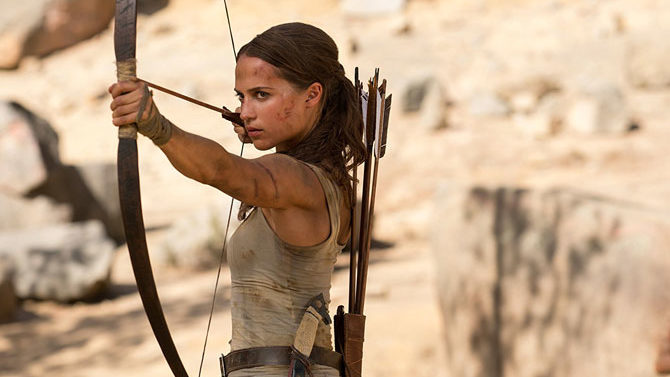 When, exactly, did we all agree that video games would make good movies? As a medium, games have stolen almost their entire visual language from cinema. A movie version of a popular game like “Tomb Raider” removes its essential interactivity. (Then again, it is not like reverse engineering interactivity into a game adaptation of a blockbuster guarantees success.) Gamers do not want to skip the gameplay just to sit through the cutscenes, no matter what Hideo Kojima thinks. But the cutscenes in the two most recent Lara Croft games are more engaging than this reboot attempt, starring Academy Award winner Alicia Vikander as the gun-toting, spandex-wearing adventurer.
Loosely based on the highly successful 2013 franchise reboot, Tomb Raider begins with an untrained Lara getting her butt handed to her in a gym. The game began similarly, with an unskilled Lara having to learn how to fight and survive. However, movie Lara levels up without breaking a sweat in so much as a single training montage. One act, she is a bike messenger; the next, she is a globe-hopping adventurer fighting off trained mercenaries while searching for her dear, declared-dead dad (Dominic West), who went missing while exploring an uncharted island for a mythical Japanese queen of death.
The movie peaks midway through, thanks to Vikander’s charmingly brash take on the rich-girl-playing-working-class trope. Problematically, a bike race through London and a foot chase after Chinese bag-snatchers are way more memorable than any of Lara’s island exploits. By the time Daddy Croft shows up alive (unsurprisingly), the movie slows down to a bore. Not even the always-clever Walton Goggins, faintly mugging as lead villain Mathias Vogel, can discover any treasure in this blockbuster tomb. Fun is a key trait Tomb Raider sorely lacks.

Still, it may find itself achieving game-movie-of-the-year status, but is being a serviceable video-game adaptation much of an achievement? As far as cinematic adventuring goes, Lara Croft gets no closer to touching the brim of Indiana Jones’ fedora than did Allan Quatermain. What evidence do we have to continue adapting video games into movies? Nothing but the hundreds of millions in box office that sustains them.