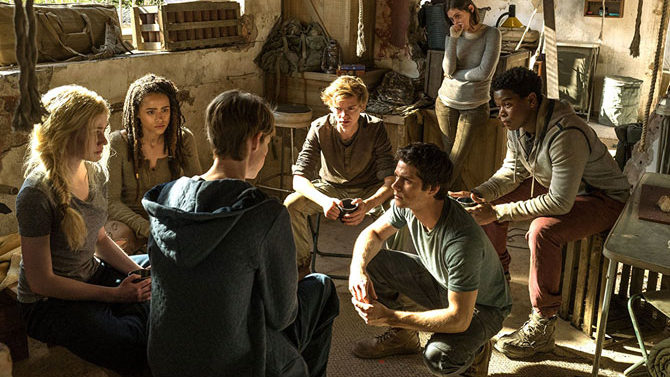 The Maze Runner outlasts its YA competitor, Divergent, by at least ending on an up note. The final chapter does not suffer from the lack of memorability that doomed the second entry, The Scorch Trials, though I am still unsure what WCKD really is and why it is so bad. The rebels in The Maze Runner world have less of the clear-cut goals of Star Wars’ rebel scum. Thomas (Dylan O’Brien, who is more committed than a young actor with another potential franchise could be) and company are more interested in saving their immune pals than the rest of the zombie plague-ridden world.

Speaking of zombies, this horror trope really seems past its sell-by date when Thomas and his fellow Glade survivors, Newt (Thomas Brodie-Sangster) and Frypan (Dexter Darden), face off against some Cranks in a tunnel, which has to be the most overused zombie-movie set piece. Fortunately, series vet Wes Ball has learned a little more about action directing with each entry; he has graduated beyond merely competent and should be trusted with bigger, better material in the future.

It might be smarter to give the outstanding adults, like Giancarlo Esposito and a rather nastily made-up Walton Goggins, more to do, but the key demo of this franchise is teenagers, so the more O’Brien, the happier the “Teen Wolf” fangirls/boys. If the great dystopian YA craze ushered in by The Hunger Games has reached the inevitable end of its line, The Death Cure is a rather satisfying final chapter.