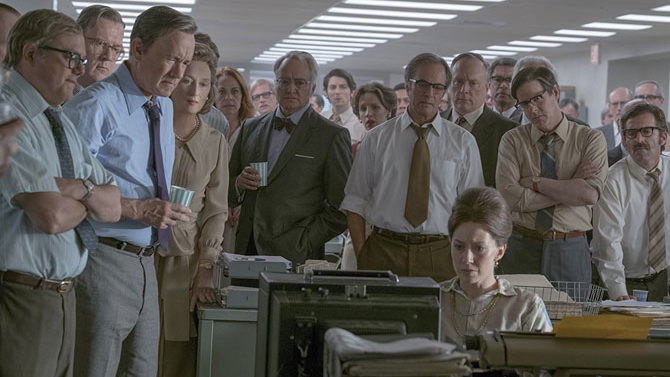 Movies set in 1971 do not get much more relevant and entertaining than Steven Spielberg’s latest crowd pleaser, which shows yet again that you do not even have to make this stuff up; history is wild enough on its own. With a virtually royal cast led by Meryl Streep and Tom Hanks as Washington Post publisher Kay Graham and her legendary editor Ben Bradlee, The Post excitingly covers one of the most significant bits of investigative reporting in American history, the publishing of the Pentagon Papers. The classified documents released by Daniel Ellsberg (Matthew Rhys) revealed decades of lies by every U.S. president from Harry Truman to Richard Nixon and led to New York Times v U.S., one of the most significant Supreme Court rulings of all-time on the First Amendment. The pairing of Streep and Hanks delivers the goods, supported by an army of supporting stalwarts led by Bob Odenkirk and Tracy Letts. Odenkirk, who once was an awful actor, has turned into a heavyweight, thanks to AMC’s Saul Goodman (née Jimmy McGill); meanwhile, Letts has had a hat trick of performances worthy of supporting-actor consideration. In the midst of a presidential administration as adversarial with the press as anyone since Nixon, The Post will help audiences distinguish between real journalism and “fake news.” Now, if only it could also lead to a newspaper subscription or two.