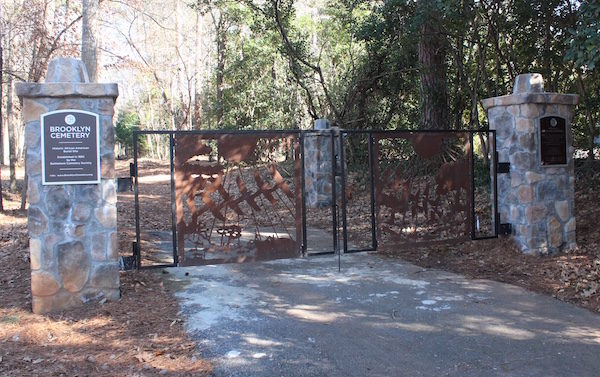 Monday morning, volunteers poured into the parking lot of Holy Cross Lutheran Church to help with the restoration efforts of Brooklyn Cemetery, one of the first African-American cemetery in Athens. Over the years, time and nature have taken claim to the resting places of the hundreds buried on its grounds.

Gathering on the annual MLK Day of Service, the Friends of Brooklyn Cemetery, led by trustee Linda Davis, worked with clearing paths and revealing unseen tombstones. All of their efforts led to the dedication of their new signage to the cemetery.

What seems like a small part of this ongoing project is actually an important step to the maintenance and preservation of the area. When Davis, whose grandparents are buried in the cemetery, took on this project in 2006, it was unclear to the community who actually had ownership of the property. Over 10 years later, the group brings over 600 volunteers from the Athens area each year to help with its efforts.

The signs are located at both entrances of the cemetery, which is behind Clarke Middle School—at one entrance, alongside gates built by local artist Harold Rittenberry and installed last year.

“Now you can’t drive down Westlake without seeing our sign,” Davis said.

Signs are also placed within the 10-acre cemetery to display the operating hours.

Davis recounted a time where the cemetery had many homeless camps throughout the cemetery due to the neglected state. Now that signage is up, it will explain how to respect the historic grounds.

The signs were donated by Columbia Residential, with the driving force being the partnership between their chief operating officer, Jim Grauley, and Davis. “I kept running into him,” Davis recounted,” [and he] kept asking ‘What can we do’.”

Originally, Grauley, whose company was developing the new apartment complex Columbia Brookside, was contacted for the mulch that their project could produce for the cemetery. Although they eventually chose not to use the mulch, Grauley found a way to help with the project.

Though their work is not complete, Davis is excited to bring change to the community that supported her.

“It’s beyond a project. It’s a debt,” she said. “I can’t walk through this cemetery and not feel like I’m walking down the street in my neighborhood. These are the people who guided me.”