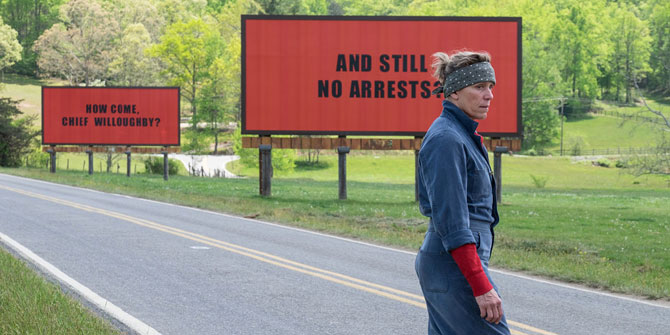 Martin McDonagh has never failed to intrigue, even when his previous films have not been completely cooked. (In Bruges is a much more well-done dish than Seven Psychopaths.) Three Billboards Outside Ebbing, Missouri has more in common with Seven Psychopaths than In Bruges, despite Three Billboards featuring better performances than McDonagh’s previous films combined. Unfortunately, the characters are much less appealing than portrayers Frances McDormand, Sam Rockwell and Woody Harrelson (although his police chief is actually pretty swell). Bad characters do not necessarily sink a film, but they definitely hurt its overall impact.

On an unused road outside the seemingly isolated burg of Ebbing, MO, Mildred Hayes (McDormand, who is sure to be near the top of multiple year-end lists) has rented three billboards to needle the local police, particularly Chief Willoughby (Harrelson), about her daughter’s unsolved rape and murder. This rebellious act does little to endear Hayes to the local populace or violent deputy Jason Dixon (Rockwell), who may or may not have tortured an African-American suspect while in custody (he probably did it). Soon, she and anyone considered friendly to her cause, including a smitten Peter Dinklage, the redhead who rented her the billboards (a much more appealing than usual Caleb Landry Jones) and her surviving child (Lucas Hedges, who here and in Lady Bird proves his acclaim for Manchester by the Sea was no fluke), experience the wrathful indignation of everyone from Officer Dixon to the local dentist.

As sharp as 90 percent of McDonagh’s script is, the other 10 percent can be really hard to stomach. The dialogue ranges from pithy to less than polite to outright offensive. The casual use of the pejorative “retard” can certainly be shorthand for a character’s flaws. Multiple uses to describe someone driving down the road less traveled seems a miscalculation on the part of the writer, or evidence of McDonagh’s woeful contempt for rural America. By the last act, the audience is forced to latch onto questionable acts of redemption for characters that probably do not deserve another chance.

Nevertheless, McDormand and Rockwell slip enough charisma into the mix to overcome the one overwhelming flaw in McDonagh’s above-average film. Harrelson’s harried lawman may stray too near sainthood, but at least he is remotely appealing. Featuring so many great performers supported by a prickly script, Three Billboards tidily entertains, even if the vengeful, grieving whole is a bit too ugly.