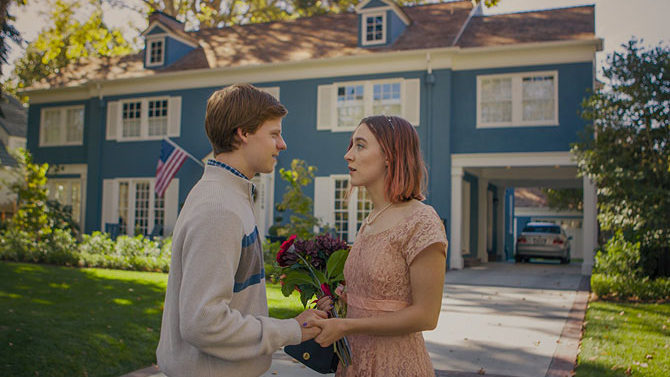 Ever a joy to witness on screen, Greta Gerwig proves just as delightful behind the camera. Writing and directing on her own for the first time, Gerwig grants the already gifted Saoirse Ronan with her greatest role yet, which says a lot for someone with two Oscar nominations before the age of 22. Christine “Lady Bird” McPherson, a complicated high-school senior frustrated to be growing up in cultureless Sacramento with pedestrian parents (Laurie Metcalf, who should win the other half of the acting awards Ronan cannot, and the heroically sympathetic Tracy Letts), gives Ronan a great shot at an Oscar, not to mention the slew of lower-profile awards for which she should be in line.

Lady Bird’s coming of age is not new to cinema, yet Gerwig’s version is light, fresh and modern, despite being set in 2002. The film has the air of autobiography, though whether or not anything similar happened to Gerwig is inconsequential; it simply feels true, which matters more than it being true. Gerwig proves to have used her time with Woody Allen, Whit Stillman, Noah Baumbach and others as an apprenticeship, resulting in a debut every bit as spectacular as anything from their luminous filmographies. Lady Bird is an independent critical darling and an authentic comic crowd-pleaser that truly earns its must-see status.