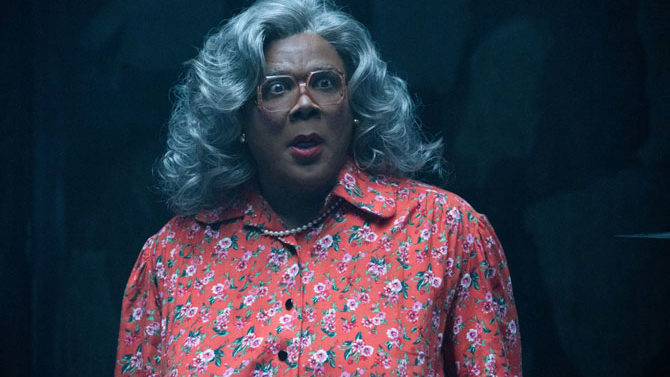 Tyler Perry’s crusty matron, Madea, returns for another seasonal jaunt. With jokes that are expectedly stale and an absolutely rotten plot, Boo 2! will only entertain the already converted. Boo 2! picks up a year after Boo! on the 18th birthday of Brian’s daughter, Tiffany (Diamond White), who still wants to hang out with the sad frat guys led by YouTube star Yousef Erakat. This year, they plan to hold their yearly party at Lake Derrick, the home of an infamous killer obviously inspired by Friday the 13th’s Jason Voorhees.

The movie is every bit as uninspired as one would expect from a sequel to a horror “parody,” which may be too generous a term for Boo 2! The best scenes remain any involving Madea’s elder cohort—Brian’s father Joe (also Perry), Aunt Bam (Cassi Davis) and Hattie (Patrice Lovely)—though Joe’s shtick seems more sexual than usual. This feature still feels like something that would fit better as seasonal TV or perhaps an anthology featuring “scary” shorts headlined by franchise regulars. Anything would be an improvement over another hour-and-a-half plot revolving around a frat party.