Battle of the Sexes Review 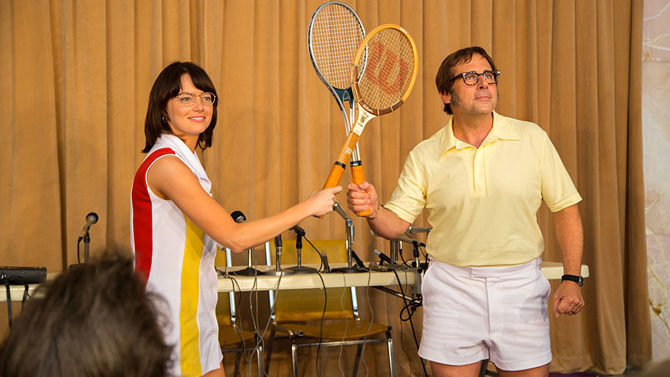 Battle of the Sexes provides a public service, recreating a watershed pop-culture moment that has been mostly forgotten in this short-attention-span era where everything is televised so nothing is remembered. In 1973, Billie Jean King (Emma Stone) was atop the world of women’s tennis. Still, she grimaced as her sport and her gender were dually disrespected by the old guard, represented in the film by the face of pro tennis player Jack Kramer (Bill Pullman). As a result, King had to take on 55-year-old, self-styled male chauvinist Bobby Riggs (Steve Carell) in a spectacle dubbed the Battle of the Sexes.

Everything in this film from Little Miss Sunshine duo Valerie Faris and Jonathan Dayton works perfectly. As is key in any biopic, its leads are subsumed by their real-life subjects. All Carell has to do is retain Riggs’ charismatic showmanship despite his sexism. It’s Stone who has it tough, balancing King somewhere between paragon of virtue and unsympathetic revolutionary. Considering the current political and social climate, this 1972 sports dramedy seems way more timely than it does old-fashioned.