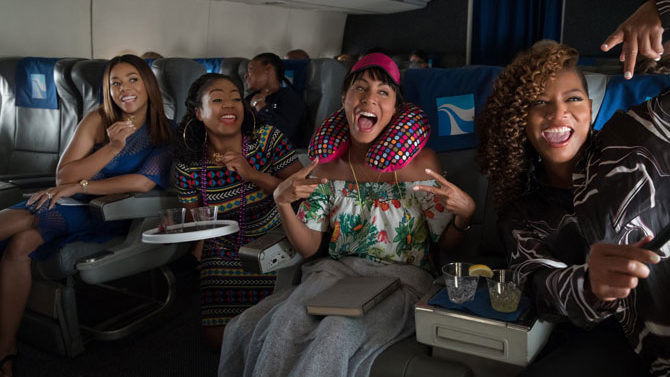 Talk about a movie that needs a better trailer. Had you sat through the preview as often as I have and heard Tiffany Haddish so forcibly repeat “Booty hole!” ad infinitum, you would not expect much laughter from this comedy either. Instead, Girls Trip is a raunchy, raucous riot, funnier than the year’s prior female-led comedies combined.

Inspirational pseudo-Oprah Ryan Pierce (Regina Hall) takes her three college besties, known as the Flossy Posse, to New Orleans for the Essence Festival. No comic destination on this flick’s itinerary is unexpected, but they are all filled with gut-busting gags. Haddish, 10 years younger than her three co-stars (yet still believable as one of the crowd), steals the entire movie from Hall, Jada Pinkett Smith and Queen Latifah. Every raunchy remark expelled by Haddish lands with the force of a funny scattergun.

Points are deducted for the uneven tonal shifts from gross-out comedy to feel-good friendship and the musty infidelity plotline, but not nearly enough to kill the film’s hilarious joy. As long as you find coarse humor funny, you should buy tickets for this Girls Trip.