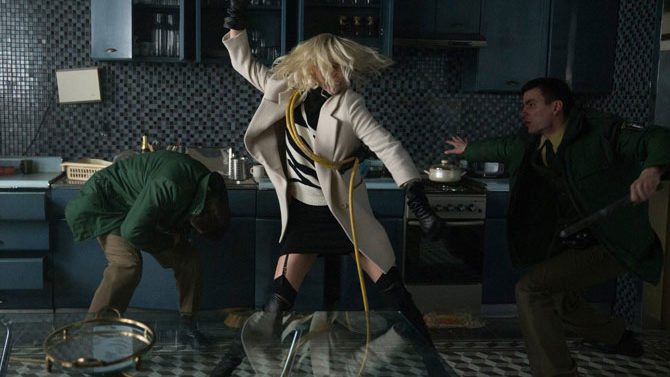 I refuse to blurb something stupid like “Atomic Blonde blows John Wick away!” but it is the latter film’s damn fine sister. After getting no credit for his work directing John Wick, Brad Pitt stunt double David Leitch absolutely bottles that hit film’s lightning.

Amidst the collapse of the Berlin Wall, British secret agent Lorraine Broughton (Charlize Theron, who proves all the Jane Bond detractors way wrong) is sent to that divided city to discover what happened to a file identifying every covert agent in the field that was lost after the murder of a fellow agent. (Seriously, how many NOC lists are out there? At least enough to fuel the entire modern spy film genre, apparently.) But can she trust her contact, James McAvoy’s British agent gone feral in East Berlin?

This action film is stylishly clad from its opening credits to its ’80s couture and wickedly familiar soundtrack. (I was surprised “99 Luftballons” took so long to show up on the playlist.) Action movies tend to be fueled by an early kinetic energy that runs out before their balls-to-the-wall climactic set pieces; Atomic Blonde never flags. Instead, it combines John Le Carre plotting with John Wick-esque stylish, graceful action. Thanks to its period setting and absolute gorgeousness, Atomic Blonde stands out from the dime-a-dozen action pack to which audiences have grown soporifically accustomed.