Pirates of the Caribbean: Dead Men Tell No Tales Review 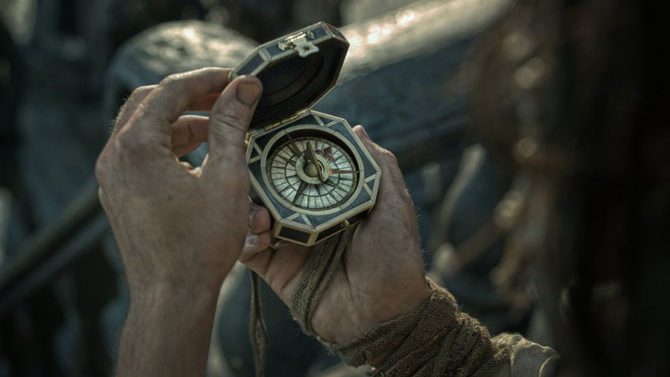 Five movies in, Pirates is a franchise with a star that still needs a hero. As played by Johnny Depp, Capt. Jack Sparrow succeeds as a humorous supporting character, but this series needs a swashbuckler. In Dead Men Tell No Tales, the filmmakers offer yet another pretty, young Orlando Bloom substitute—this time around, it’s Brenton Thwaites of The Giver and Maleficent—without any heroic heft. For two-plus hours, Jack sashays from one intricately computer designed set-piece to another, and each one is more assaultive than its predecessor, so that the audience winds up more exhausted than entertained by the time the post-credits scene promises yet another adventure.

As if it matters, the plot of Pirates 5 revolves around Jack being without his beloved Black Pearl, pursued by Geoffrey Rush’s Capt. Hector Barbossa, again. Also on Jack’s tail is the cursed ghost of Capt. Salazar (Javier Bardem) and his deceased crew on the Silent Mary. Joining Jack are Will Turner’s son, Henry (Thwaites), and whip-smart Carina Smyth (Kaya Scodelario), both of whom are searching for the legendary trident of Poseidon, which will break all of the sea’s curses.

Kon-Tiki directors Joachim Ronning and Espen Sandberg fill Pirates 5 with so much fun supporting chaff that its lack of any filling wheat is all the more disappointing. The attempted concurrent executions of Jack and Carina lead to the movie’s most thrillingly original set-piece—next to the rotting shark attack. Pirates of the Caribbean should be Indiana Jones on the High Seas, but since the surprising first film, the franchise has spent far too much time stuck in the doldrums.