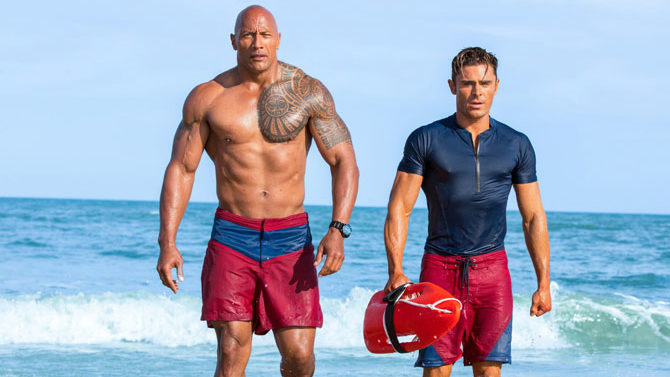 Few programs encapsulate ’90s syndication like “Baywatch,” the David Hasselhoff-led lifeguard drama that made Pamela Anderson a household name. Sure, other blondes wore the red spandex uniform—Erika Eleniak blazed the lifesaving trail in the show’s quickly canceled season on NBC (the only time I watched it on a weekly basis)—but Anderson’s C.J. Parker was the queen of the beach.

Due to its inherently campy nature, “Baywatch” makes for a tricky screen adaptation. The temptation is to go full camp, essentially becoming a scattershot parody; the team of writers, which includes the notorious, lovable Thomas Lennon and Robert Ben Garant, opt to go with the more straight-faced reboot, pepper it with gags and let it play like a two-hour pilot for a fall Fox revival. This decision makes the casting of Dwayne Johnson in Hasselhoff’s stead as Lt. Mitch Buchannon even more crucial to the movie’s moderate value as an early-summer diversion.

Those unaware of the general premise of “Baywatch” should pick it up pretty quickly. Buchannon leads a team of crack lifeguards—Stephanie Holden (Ilfenesh Hadera) and C.J. Parker (Kelly Rohrbach)—in protecting the beaches of Emerald Bay (sort of like Miami, but calmer). But these pros do not just guard the lives of swimmers; they foil all sorts of crime, as well as deal with multiple disasters. The film incarnations of Mitch, Stephanie and C.J. must not only stop the dealing of a dangerous new drug, flakka, on their beach; they also need to break in three trainees—two-time Olympic gold medalist Matt Brody (Zac Efron), standout Summer Quinn (Alexandra Daddario) and out-of-shape C.J. devotee Ronnie Greenbaum (Jon Bass).

Like its inspiration, the movie treats the lifeguards’ drug-dealing investigation like they have walked onto an episode of “Miami Vice.” Only Brody, a class-A Olympic disaster à la Ryan Lochte forced on Buchannon by his boss (Rob Huebel), sees this issue as one to be handled by the police, not these guardians of the beach. Some of the movie’s funniest moments occur when Mitch and crew run afoul of beach beat-cop Sgt. Ellerbee (Yahya Abdul-Mateen II). And nothing in the movie is funny if Johnson is not involved. I fear the day we learn the unforgivable flaws of this beloved former wrestler, whose sunny disposition and crackerjack delivery elevate every single project—be it a summer blockbuster or an episode of “SNL”—with which he is involved.

I always enjoy Efron, but his comic-book physique is nearing ridiculous levels that overshadow his appealing performance. How is Daddario not a bigger star yet? And why was she cast as Nicole Eggert’s Summer, when her rookie would have made a better Shauni, while Brody’s orphan backstory is clearly more apropos for Shauni’s love interest, Eddie Kramer? (Sorry, that last sentence may dive deeper into the “Baywatch” “mythology” than is necessary.) Baywatch will not save any lives, but is no worse a way to while away a summer afternoon than your typical disposable beach read.