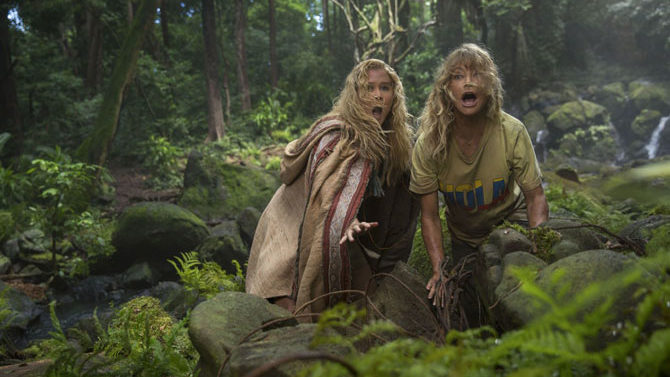 An entitled young American and her mom (Amy Schumer and Goldie Hawn) are vacationing in Ecuador when they are snatched by some South American toughs. The teaming of Schumer and Hawn provides expected charm, but the movie, written by Ghostbusters’ Katie Dippold, could have used more polish from Schumer and/or producer Paul Feig.

The appearance of Christopher Meloni as a dim but dashing jungle guide veers the comedy briefly into Romancing the Stone territory before falling off a cliff, literally. Brief appearances by Wanda Sykes and a silent Joan Cusack, plus the silly back and forth between Ike Barinholtz’s agoraphobic brother-son and Bashir Salahuddin’s State Department employee, add more than they subtract.

Perhaps if Schumer’s Emily Middleton were as appealing as the star’s usual selfish, young boozer, Snatched would feel more smart satire than fatigued formula. Still, the movie is far from laughless, and boasts Hawn’s first starring role since 2002’s The Banger Sisters. One assumes the Hollywood legend ended her acting sabbatical to work with Schumer, because it could not have been the draw of a rather average comedy that gives her much less to work with than her younger co-star.