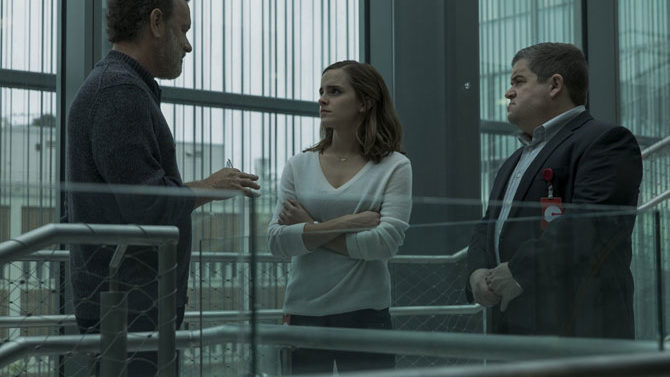 The Circle is more problematic post-viewing than during. Throughout the entirety of its 110-minute running time, I was utterly entertained. Cedar Shoals graduate James Ponsoldt has a stellar track record, and The Circle is his highest-profile picture to date—it stars Tom friggin’ Hanks! However, what could have been his greatest achievement is not his best film.

I did not read Dave Eggers’ novel, which Ponsoldt adapted with the author, but a plot summary quickly reveals some massive narrative changes involving the climax and villainous responsibility. The Mae of the screen is more heroic than the Mae of the page, and this change scrubs too much dystopia from this social media satire.

The Circle is a global powerhouse of a tech company—think Google meets Facebook—at which young college graduate Mae Holland (the likable Emma Watson, who made a better witch and Disney princess) just got an entry-level job in CE (Customer Experience). Soon, she is rubbing elbows with company bigwigs Eamon Bailey (Hanks) and Tom Stenton (Patton Oswalt), as well as a mysterious young fellow (John “Finn” Boyega), whose name Mae conveniently does not know.

After her choice to go “Transparent,” or wear The Circle’s cool, new SeeChange camera 24/7, mars her relationship with her folks (Glenne Headly and the gone-too-soon Bill Paxton)—including her father, who is battling multiple sclerosis—and ruins her childhood friendship with off-the-grid Mercer (Ellar Coltrane, who came off a lot more natural in Boyhood), Mae has to decide whether or not she wants to be in or out of The Circle.

Apparently, the novel made this decision murkier for Mae. In the movie, Ponsoldt and Eggers clarify The Circle’s villainy from the get go, thanks to some not-so-subtle turns by Hanks and Oswalt, who may as well have had a mustache to stroke. How can we be sure Hanks and Oswalt play bad guys? Hardly anyone else in the movie is a rich, old, white dude.

The film is that glib with its wrongdoing. We are rarely offered any of the duo’s evil acts (outside of allegedly blackmailing a senator who was probably doing something bad anyway). They are rich and secretive; hence, they are unscrupulous. At least the book had the good sense to throw some shadiness Mae’s way.