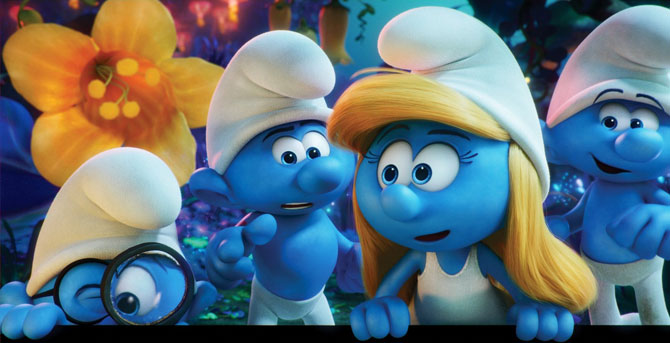 I did not think I would ever consider the 2011 live-action Smurfs movie to be the height of this franchise, but that film feels positively masterly compared to the new, animated Smurfs feature. RIP Jonathan Winters, the voice of Papa Smurf in The Smurfs and The Smurfs 2, though he is replaced by the resolute Mandy Patinkin. At least the franchise jettisoned Hank Azaria’s atrocious Gargamel for Rainn Wilson’s respectably cartoonish, evil wizard who likes to eat little blue people. Jack McBrayer, “30 Rock”’s Kenneth, ably replaces the more poignant Anton Yelchin as Clumsy Smurf. The rest of the voice casting is pretty spot on, with Joe Manganiello as Hefty and Danny “Abed” Pudi as Brainy. (Gordon Ramsay’s Baker Smurf may be a bit on the nose.)

The Lost Village feels like a 1986 cash grab that would have been released to compete with GoBots: Battle of the Rock Lords, which, my mother is all too happy to tell you, sucked. The bulk of this third Smurfs movie revolves around the difficulties of Smurfette being the only female Smurf, one created by Gargamel. Then they discover the Lost Village, with a host of blue ladies voiced by Julia Roberts, Michelle Rodriguez, Ellie Kemper, Ariel Winter (“Modern Family”) and Meghan Trainor. More female Smurfs may be good for the perpetuation of the Smurfs as a race, but it does not make a difference in stopping Gargamel’s harassment, which is the main problem facing the Smurfs.

The main problem facing audiences is that this third Smurfs feature, the most faithful to its cartoon source material, is the least cinematic. Still, the Smurfs are the Smurfs. Kids are going to love it as much as love any incarnation of Peyo’s tiny creations. Unfortunately for adults and children of the ’80s, it seems nostalgia is not intensified through blue tinted lenses.