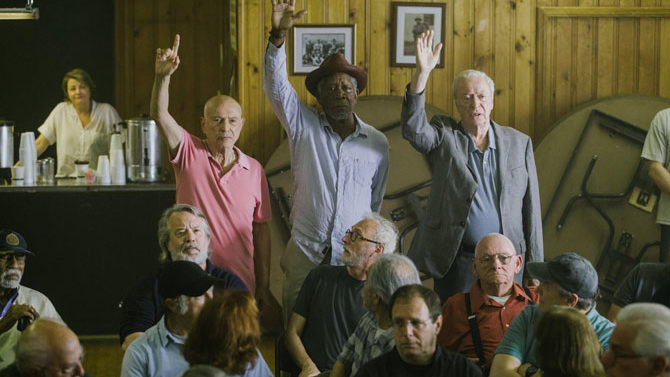 As far as remakes go, Going in Style is savvier than most. Why remake a classic people remember all too well when there are mostly forgotten, mid-level flicks like the 1979 Martin Brest film starring George Burns, Art Carney and Lee Strasberg lying around? This remade heist comedy, directed by Zach Braff (grr, unless we are talking about “Scrubs”), is less than pretty good but better than bad thanks to stars Michael Caine, Morgan Freeman and Alan Arkin.

After experiencing a bank heist first-hand, a retired steelworker, Joe Harding (Caine), decides he and his pals—Willie (Freeman), whose kidney is failing, and Albert (Arkin), a failed saxophonist—can pull off the very same crime. When the three retired co-workers’ pension goes belly up after a financial restructuring, they put Joe’s plan into action and plot to rob their bank with the assistance of a criminal named Jesus (John Ortiz, last seen in Kong: Skull Island). These desperate old men are not criminals and only want to take back what they are owed. Nonetheless, they must evade the cops, represented by Matt Dillon’s FBI Agent Hamer.

Nothing is particularly original about this flick, though it remains quite relevant, given our post-Great Recession economy. Hidden Figures writer-director Theodore Melfi’s script succeeds more thanks to the chemistry of Caine, Freeman and Arkin, whose delivery is the film’s MVP, than on its own puny strengths. Rob Simonsen’s music is way beyond subtle, and Kenan Thompson’s teeny appearance delivers the most laughs.

Nonetheless, Caine, Freeman and Arkin have enough combined chemistry and years to earn at least 90 minutes of our attention. Still, the movie’s biggest act of thievery is Caine’s pilfering of Tom Wilkinson’s American accent for the climactic bank robbery. Ann-Margret still looks terrific, even if she is just recreating her Grumpy Old Men role nearly 25 years later. Wrap your head around the fact that a 52-year-old Ann-Margret was being wooed by two 70-year-olds in that movie; at least Going in Style’s matchmaking is more age-appropriate.

After burning all his Garden State goodwill on the Kickstarter for a sophomore feature that no one remembers—it came out in 2014 and was called Wish I Was Here, in case you could not recall—Braff’s third directorial effort will not salvage his indie cred, but could better establish him as an option for bland, focus-grouped “fun,” were anyone to remember Going in Style as a Zach Braff film. But it’s unlikely they will remember Going in Style at all, much less who directed it. Those who do recall it are likely to confuse it with Last Vegas or any of the plethora of other flicks that make up the ever-growing Grumpy Old Men Gone Wild subgenre.