Fantastic Beasts and Where to Find Them Review 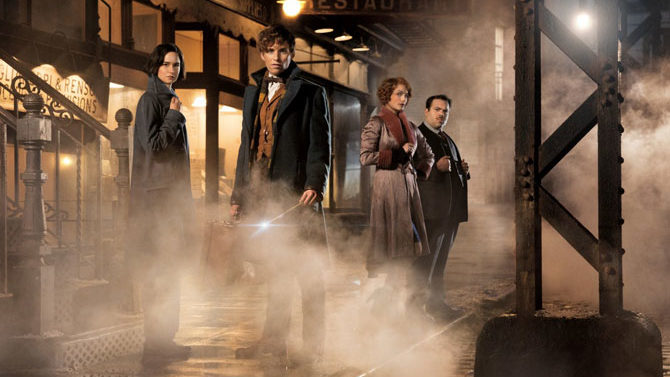 What a triumphant return to J.K. Rowling’s Harry Potter universe! Rowling opens up the world she created by revealing what was happening in magical America in the early 20th Century. While future legendary headmaster Albus Dumbledore was educating witches and wizards as an instructor at Hogwarts School of Witchcraft and Wizardry—if you did not already know, its American counterpart is known as Ilvermorny—an evil wizard named Gellert Grindelwald was wreaking pre-Voldemort havoc across Europe. Concurrently, the American magical world was dealing with its own issues thanks to the New Salem Philanthropic Society, aka the New Salemers, an anti-magical movement led by Mary Lou Barebone (Samantha Morton).

Into this turmoil walks Newt Scamander (Eddie Redmayne), an awkward, perhaps even autistic wizard, carrying a suitcase filled with mythical creatures he wants to protect. But a chance encounter with a No-Mag (what Americans call magic-less Muggles) named Jacob Kowalski (the often scene-stealing Dan Fogler) leads to the escape of several creatures, including a cute, avaricious platypus-like Niffler, a horny sort of rhinoceros called an Erumpent and the invisible sweetheart known as a Demiguise. As a result of their escape, Scamander runs afoul of MACUSA (the Magical Congress of the United States of America) and a pretty, demoted Auror named Tina Goldstein (Katherine Waterston). Can Scamander save his fantastic beasts, or will Colin Farrell’s MACUSA enforcer Percival Graves catch him first?

The hook of Fantastic Beasts comes more from the depth of Rowling’s world than the immediacy of its narrative. In her first screenplay, Rowling greatly expanded upon the scant 2001 “textbook” written to benefit the charity Comic Relief, turning it into a proposed five-film franchise. Her world will certainly support such an ambitious effort, even as this expansive idea means its initial entry inevitably lacks the sort of self-contained narrative structure to make its events feel significant. I refuse to ruin the film’s final reveal, though it is easily spoiled by a cursory internet search, but it so obviously redefines the franchise’s course that everything preceding it seems to lose import. Fortunately, the preceding two hours are charming and magical enough to withstand such a blockbuster assault.

Fantastic Beasts can also lay claim to being the most mature entry in the still-growing Potterverse. Think of this film as the first in an adult series; the YA tropes already being shed by the fourth novel are long gone. The most high-profile young character is Ezra Miller’s Credence Barebone, who is clearly being groomed by the predatory Graves. Later scenes are dark and frightening; any kid that could not handle Deathly Hallows will not be ready for Fantastic Beasts. Those already in love with this universe will only have one complaint. Why couldn’t I read the book(s) first?