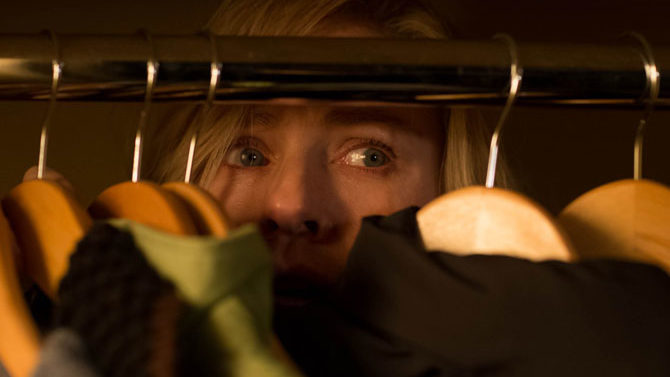 For the life of me, I cannot determine why this generic horror movie was not dumped in the frigid wasteland of January or February, where its wintry landscape would have felt more seasonally appropriate. Its release not quite two weeks after Halloween makes one wonder why the studio did not position for an October release to generate a little extra cash from the horror holiday season. As it stands, Shut In will be gone and forgotten before Thanksgiving.

The narrative offers little new, as widow and clinical psychologist Mary Portman (Naomi Watts, pretty much reprising her role from The Ring) cares for her invalid stepson, Stephen (Charlie Heaton, the creepy older brother from Netflix’s “Stranger Things” acting even creepier), in a beautiful house in Middle-of-Nowhere, ME. After one of Mary’s patients, a young, deaf boy named Tom (an absolutely wasted Jacob Tremblay), goes missing while staying overnight at her house, Mary starts hearing things go bump in the night and having vivid nightmares diagnosed as parasomnia by her doctor (Oliver Platt). And there is the generic rub. Is Mary going crazy, or is she really being haunted by the ghost of poor, dead Tom?

On a positive note, director Farren Blackburn finds the eeriness in the setting—Mary’s cold, dark, empty house/existence—not the story. The eventual reveal is so inevitable it is more likely to produce a shrug than surprise. On the other hand, anyone looking for a really boring Shining stand-in will be thrilled, though that demographic has to be a pretty tiny target, right?