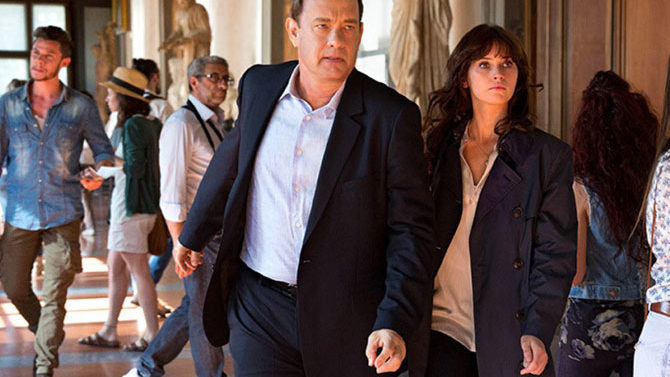 The first two movies in the Da Vinci Code/Robert Langdon/Dan Brown series (obviously, I don’t know what to call it) have pretty much strayed from memory after a decade (that’s how long ago The Da Vinci Code was released; Angels & Demons dropped in 2009). Now the third book hits theaters thanks to Ron Howard and Tom Hanks. All the talk about the first movie revolved around whether or not the runaway bestseller was “adaptable” and how bad Tom Hanks’ hair was (it was awful); now all I remember is the hair and Paul Bettany. I remember even less from its literary prequel/movie sequel. What was Angels & Demons even about? I do recall that the Vatican was involved somehow, but isn’t that obvious?

Langdon is back in the Brown book that excited me most. Dante’s Divine Comedy is my favorite work of literature, bar none, and Inferno is definitely the most exciting entry. I do not even really care about the population-quelling conspiracy Langdon has to solve. The novel was the typically breathtaking, globe-trotting Brown thriller. Nothing particularly noteworthy, but it doesn’t disappoint, either.

So, how is the movie version? Eh. Howard directs Inferno with a workmanlike diligence, but the only memorable piece is the wild score by Hans Zimmer that would not sound out of place had Dario Argento directed a batshit crazy version of the novel. (That movie actually sounds like a lot of fun. He could cast Asia as the female lead and some washed up C-lister like Michael Pare as a new Robert Langdon. But I digress.)

Instead, we get a steady Hollywood thriller with Hanks reprising his not-quite-right version of the Harvard professor and symbologist. Why have we hamstrung two dynamic literary heroes—Langdon and Jack Reacher—with the wrong Hollywood superstars? But Hanks’ ill casting does not ruin Inferno any more than it did its two predecessors; it merely weakens it.

Something feels off and cheap about Inferno, though; it could be the $75 million budget, which is half of what was spent on Angels & Demons. But these adaptations should not be about effects or spectacle. They need to find a more intriguing, subjective way to portray Langdon’s superpower: his mind. Inferno rushes through Langdon’s most significant discoveries—the Faraday device, the Dante Death Mask—in favor of the action set pieces, which just do not thrill. Even the memorable chase amongst the rafters of the Palazzo Vecchio fails to ignite the thrills.

Inferno feels as if it is nothing more than a paycheck for all creative parties involved. Unfortunately, Ben Foster has only minor involvement as billionaire geneticist Bertrand Zobrist, who plots to release a new Black Death that will cull a large chunk of the world’s population. The movie could also have used a lot more of Irrfan Khan as the mysterious CEO of the private security company known as The Consortium.

So long as Brown keeps writing Langdon novels, I guess we can count on adaptations. Hopefully, they can be put in the hands of filmmakers with more creativity. David Koepp’s script is fine, but Howard directs this with all the zip of a TV movie. He might as well have cast Noah Wyle and premiered it Sunday night on TNT. It is about time to retire Hanks as well; Langdon could use some fresh blood à la Jack Ryan (minus the age-shaving). Then again, Brown’s poor third Langdon novel, The Lost Symbol, is just sitting there waiting to be adapted. If it ever is, I hope it has more cinematic pep than the tired Inferno.