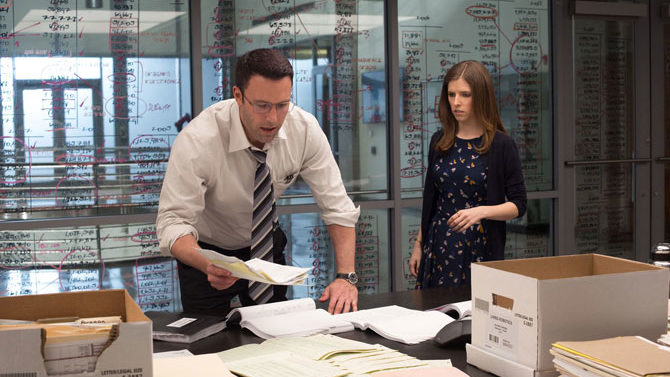 Ben Affleck repurposes his Bat-training for this role as an autistic forensic accountant who becomes a lethal weapon, and he kills it. If Affleck’s Batman was the best thing about Batman v Superman: Dawn of Justice, his deadly and socially awkward Christian Wolff is even better, as is the flawed thriller that surrounds him.

Plotwise, The Accountant is messy at best. Known for cooking the books for the world’s most wanted men, Wolff is hired to find missing millions for a Bill Gates-ian tech magnate, Lamar Black (John Lithgow). When his CPA-ing leads to some mysterious deaths perpetrated by Jon Bernthal (formerly of “The Walking Dead”), Christian goes into protector mode for an endangered pretty face, Dana Cummings (Anna Kendrick).

Concurrently, the Treasury director (J.K. Simmons) is blackmailing a young agent, Marybeth Medina (Cynthia Addai-Robinson), into identifying and locating the sought-after book cooker. Some of the movie’s weakest moments involve her unlikely deductions about the title character’s identity. “Laughable” is being generous.

Eventually, all the plots converge in the most obvious ways. How the movie thinks its big third-act reveal is still a surprise is beyond me; most viewers should nail it by early act two, at least. Still, the action often thrills, and Kendrick provides some sweet comic relief.

Considering the rising number of autistic children born in the United States, an autistic hero is laudable, but Affleck’s accountant may be too much of a Punisher–level antihero. The movie struggles to make him sound as bad as it envisions. The Terminator-tough Wolff is a better cinematic Jack Reacher than Tom Cruise’s on-deck Jack Reacher, even when his last scene seems like an SNL sketch starring Ben Affleck as Adam Sandler as Jason Bourne.

The Accountant generated more complicated feelings than I predicted. Its flaws should be crippling but are not, thanks to such a grounded, badass protagonist. I’d watch a sequel; maybe it could involve an audit that turns into a hallway fight à la Oldboy or any season of Netflix’s “Daredevil.”