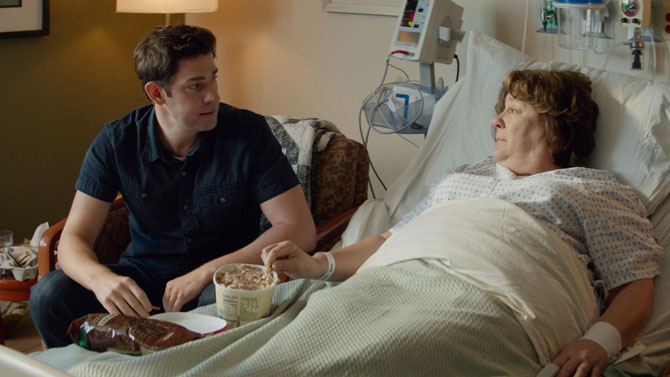 John Krasinski (Jim from “The Office”) makes his directorial debut in what feels like a more cartoonish version of Jonathan Tropper’s This Is Where I Leave You; others may see something more Garden State-ish.

Frustrated artist John Hollar (Krasinski) returns home after his mother, Sally (Margo Martindale), is diagnosed with a brain tumor. Already frightened by the prospect of a child with his pregnant girlfriend, Rebecca (Anna Kendricks), John now must negotiate his emotional, near-bankrupt father, Don (Richard Jenkins) and his man-child of an older brother, Ron (Sharlto Copley), as well as his high school sweetheart (Mary Elizabeth Winstead) and her husband (Charlie Day), a former classmate of John’s who is also one of his mother’s nurses.

If This Is Where I Leave You was not sitcom-ish enough for you, check out The Hollars. Krasinski assembled a tremendous cast for his debut, and they excel, despite the buffoonery asked of them by Jim Strouse’s script. Krasinski shows a deft hand for small-screen melodrama mixed with comedy, but it is hard to get a true read on his direction due to the support of a cast good enough to make Uwe Boll look like a professional. This film should play even better on the smallest television set in your home.