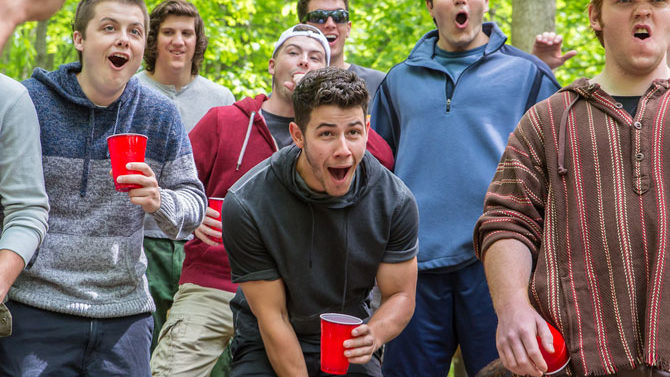 Writer-director Andrew Neel tackles Greek life with this adaptation of Brad Land’s memoir, scripted by David Gordon Green, among others. Brad Land (Ben Schnetzer, recently seen in Snowden) is recovering from a brutal beating that took place months before matriculating at college. During Brad’s first semester, he pledges the fraternity of his brother, Brett (Nick Jonas), and undergoes the hazing one reads about in newspaper articles. Physical and mental abuse abounds, but the brothers never let it go too far. They do not want to poke the university administration bear. But tragedy strikes nonetheless, and everyone is left seeking answers and someone to blame.

Much like the first half of Requiem for a Dream captured the appeal of drug use before rapidly descending into the hellish pits of addiction, Goat portrays the glory of fraternity life—the parties, the alcohol, the sex—that encourages so many young men to succumb to the horrors of hazing. Unfortunately, the film, like the brothers, never seems to go far enough. What happens to Brad and his pledge brothers is demeaning and ugly, but it typically stops short of dangerous and disturbing. The beating frame also detracts from the main plot. Still, the resulting film provokes thought and conversation about a topic society knows about but often ignores.