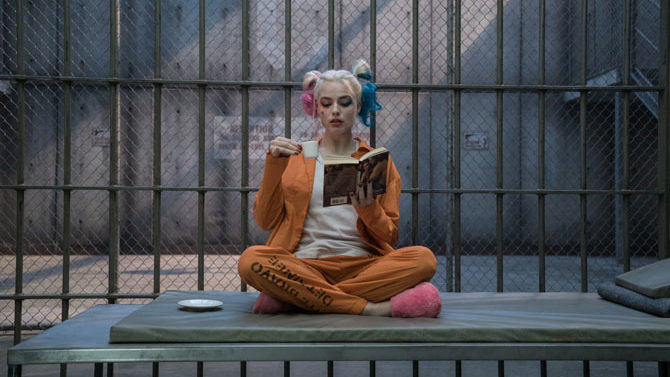 Superheroes return to the big screen for the first time since May’s Captain America: Civil War and X-Men: Apocalypse. DC’s 2016 started tough, with the critically and commercially disappointing Batman v Superman: Dawn of Justice, and the other comic giant was hoping its villainous supergroup flick, Suicide Squad, could generate some goodwill for the teasers and trailers revealing the upcoming Wonder Woman and Justice League. The first half of the movie from writing-directing tough guy David Ayer (End of Watch is his current zenith) accomplishes DC’s goal, though the flick’s legacy is bound to be weak to nonexistent.

Suicide Squad may be more deeply rooted in the superhero-movie era before Marvel redefined it, meaning it is a watchable slice of disposable entertainment. We have come to expect timelessness from every subsequent superhero outing. In its first act, Suicide Squad does redefine the DC Extended Universe (DCEU) unsuccessfully introduced by BvS. Ben Affleck’s Batman (arguably one of BvS’s highs) tangles with both Deadshot and Harley Quinn in their expository flashbacks. Early on, Suicide Squad provides evidence that the DCEU can entertain and excite. Then the narrative kicks in, and the action movie becomes another rote exercise with a ’90s-era villain.

It is hard to imagine a larger role being played by any of Suicide Squad’s minor rogue’s gallery outside of Harley Quinn, whom Robbie makes sexy, scary and a whole lot of fun, and Deadshot, mostly due to the casting of Smith. Suicide Squad will most likely be forgotten by the time the DCEU enters its second phase. Its only lasting contribution to the greater universe may be the polarizing Joker that possesses Jared Leto. The loopy insanity is there, as is a definitive laugh, but the updated appearance (the tattoos are fine; the grill is not) relegates this popular supervillain to two-bit Gotham gangster. I dread his eventual team-up with Jesse Eisenberg’s appalling Lex Luthor. Otherwise, it was nice meeting Killer Croc, Captain Boomerang (Jai Courtney, scoring a five on the Tom Hardy scale) and the fascinating Diablo (Jay Hernandez) once.

Without a larger emotional connection to its characters, Suicide Squad provides a low-risk, low-reward entry to the DCEU. The larger moviegoing public neither knows nor cares deeply about these villains. Still, Ayer should have relied on his crime-drama strengths for the larger plot; why not have this band of baddies steal something? DC probably could have benefited more from a balls-out Deadpool of a movie rather than one so standardized, but at least audiences do not have another exhausting Batman v Superman from which to recover.