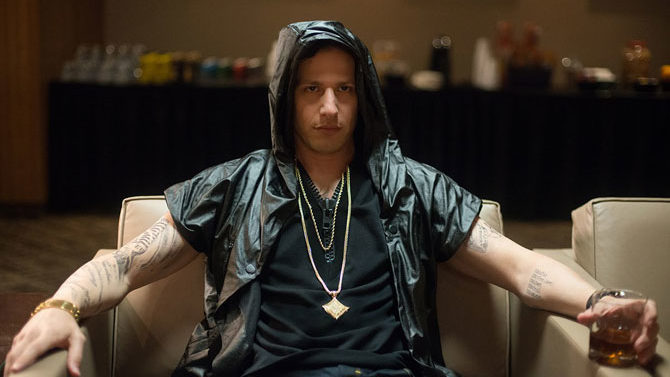 The summer of fun R-rated movies continues with The Lonely Island’s big screen debut. A true collective effort of the musical satirist trio—Andy Samberg co-wrote and stars; Jorma Taccone and Akiva Schaffer co-directed, co-wrote and co-star—pokes fun at the Biebers of the pop world as the mockumentary chronicles the fall of pop-rapper Conner, aka Kid Conner, aka Conner4Real (Samberg).

After leaving the Style Boyz, the band he started with his best friends, Owen, aka Kid Contact (Taccone), and Lawrence, aka Kid Brain (Shaffer), Conner went multiplatinum with his debut album, Thriller, Also. Now Conner is preparing to drop his second album, Connquest. With a tour sponsored by an appliance company who preloads every product with Conner’s music, Conner unwittingly brings his craziest new competitor, Hunter the Hungry (Chris Redd), on tour and commits PR seppuku by maiming “Kiss from a Rose” singer Seal.

Impressively, Samberg, Schaffer and Taccone write silly songs better than many radio hits, and Samberg has retained his comic naiveté despite years on “SNL” and his time on Fox’s outstanding “Brooklyn Nine-Nine.” Much of the parody is spot on (see Will Arnett’s aping of TMZ’s Harvey Levin). As damn hilarious as Popstar is, the comparisons to This Is Spinal Tap are too overzealous. Despite interviews with Usher, DJ Khaled, Nas, Questlove, RZA, Ringo Starr and more, it feels more mock than doc. But I do not think you are supposed to laugh as much at most documentaries.