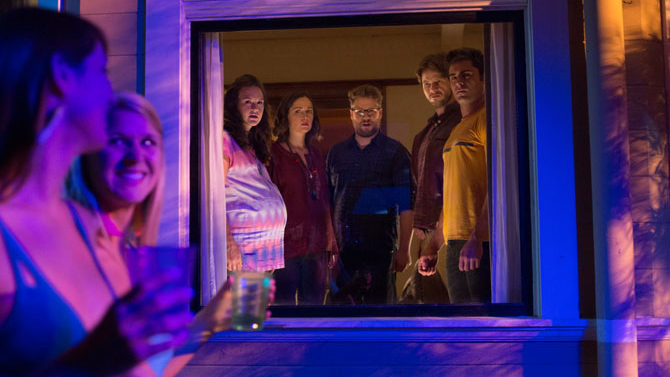 Surprisingly, 2014’s Neighbors was not only funnier than it appeared but unexpectedly warmer, too. Zac Efron’s frat bro, Teddy Sanders, is never relegated to mere bad-dude one-dimensionality. The sequel tries to give the girls of Kappa Nu, led by Chloe Grace Moretz’s Shelby, the same equal treatment, but the basketball team of screenwriters—original writers Andrew J. Cohen and Brendan O’Brien, plus director Nicholas Stoller, star Seth Rogen and his screenwriting partner Evan Goldberg—cannot accomplish this goal until this very funny sequel is pretty much over. Too bad, as Neighbors 2 may have surpassed its predecessor had it been able to humanize the sisters of Kappa Nu as well as it did the brothers of Delta Psi Beta.

The nominal plot involves Mac and Kelly Radner (Rogen and Rose Byrne) trying to sell their home when a sorority moves in next door. Having learned from their experience with Teddy and Delta Psi, Mac and Kelly know these wild 18-year-old girls are going to blow their escrow. Meanwhile, Teddy is having a hard time leaving the brotherhood behind, so he joins the sisterhood of the new sorority formed by Shelby, Beth (Kiersey Clemons, Dope) and Nora (Beanie Feldstein) after these girls learn it is against the rules for sisters to party in their own home; only bros can drink beers in their abodes. (Seriously, this rule is real and enforced by the National Panhellenic Conference.) A second Greek war then ensues between the old people—the side to which the girls banish Teddy, despite his abs and general hotness—and the youngsters.

As sequels to successful comedies go, Neighbors 2 accomplishes what many of its peers cannot. It is pretty much as funny as the original without simply resorting to a wholesale rehashing of its predecessors plot and jokes. I laughed at Neighbors 2 a lot and loudly. However, I did not like Shelby and her sisters as much as Teddy, Pete (Dave Franco), et al. until the movie was over. Despite the movie’s commendable equal rights message, the girls simply were not as amenable as the boys in the beginning. This initial villainy simplifies the conflict and makes it easier to pick sides than in the last frat war. I really wanted to sympathize with the unfair plight of the girls more, but their lack of compromise, while it may have generated the rest of the movie, drove down their rootability. That’s saying a lot, because the Radners may be funny, but they are not great people.