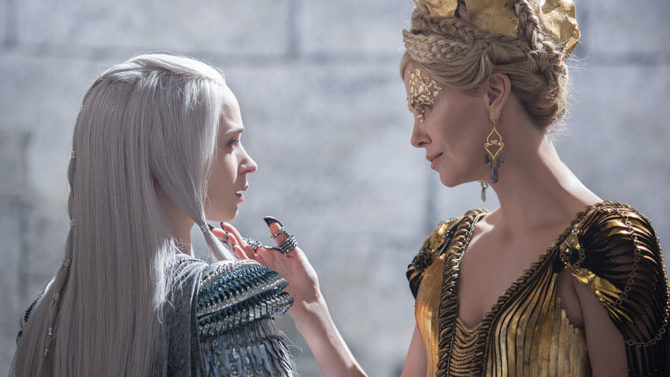 In ways, The Huntsman: Winter’s War improves on its Kristen Stewart-starring, Snow White-focused predecessor. Chris Hemsworth’s insouciant charm shines brighter with a better romantic foil in Jessica Chastain, ostensibly the female Huntsman (though we find “Huntsman” is less a job description than a military rank). For about an act, I entertainingly imagined Winter’s War to be Hollywood’s Witcher movie, and it plays pretty well as an adaptation of the popular video-game franchise. We learn that Ravenna (Charlize Theron) has a sister, Freya (Emily Blunt, the exact opposite of Theron’s campy queen), who happens to be the Ice Queen. Given this revelation, you can even reconsider the movie as a dark, live-action Frozen, which is loads more amusing than realizing how tedious it really is.

Like its precursor, this prequel-sequel (oh yeah, it’s both) has some visual pizzazz; it looks good, but is anyone looking? Multiple Oscar winner Colleen Atwood’s costume designs are a consistent standout. However, like its precursor, Winter’s War is also a mind-numbing slog through fairy-tale tropes viewed through an overcast mirror. At least the first movie had a devious mirror; here we get a Liam Neeson VO monotonously explaining everything.

The Huntsman could have used more of Theron’s campy, Faye Dunaway-as-Joan Crawford vibe to awaken this sleepy narrative, but she is barely there until the humdrum, effects-driven, climactic showdown. The rare individual who enjoyed Snow White and the Huntsman can give Winter’s War a go. The rest of the moviegoing world—most of whom never asked to return to this gloomy universe—should not go into these woods.