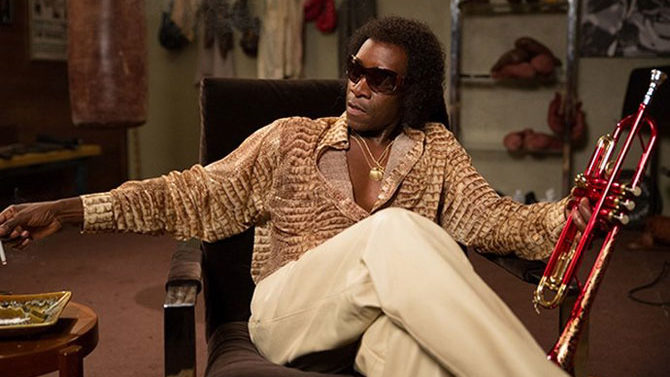 I know very little about Miles Davis, so a biopic on the jazz legend should be eye-opening. Don Cheadle, in his feature directing debut (previously, he has helmed some episodes of Showtime’s “House of Lies”), constructs a retelling of a time in Davis’ life known as his “silent period.” So Cheadle and his co-writers could be as right about Davis and Rolling Stone writer Dave Brill (Ewan McGregor) taking on a minor gangster, played by the always mesmerizing Michael Stuhlbarg (A Serious Man, “Boardwalk Empire”), for a stolen recording. Or that whole chunk of the film could be fictional.

The unraveling of Davis’ marriage to dancer Frances Taylor (Emayatzy Corinealdi, The Invitation and Amazon’s original series “Hand of God”) is recounted accurately, as are several other snapshots of the legendary musician’s life, i.e. his arrest outside of Birdland. Anyone with little knowledge of Davis will find it difficult to separate the fact from the fiction, which is what makes Miles Ahead miles ahead of many of its musical biopic brethren (I Saw the Light, for example). Cheadle knew you could not make an ordinary film about such a revolutionary jazz icon, even if his problems with drugs and women were the same as every other music legend to get their own film.

Miles Ahead tells a story; it does not recount a life. Like its peers, the film needs and has that outstanding star performance in Cheadle, who disappears under Davis’ long jheri curl and distinctive voice. I may not have left Miles Ahead as an expert in everything Davis, but I did find it more compelling and refreshingly less conventional than the average biopic.