Born to Be Blue Review 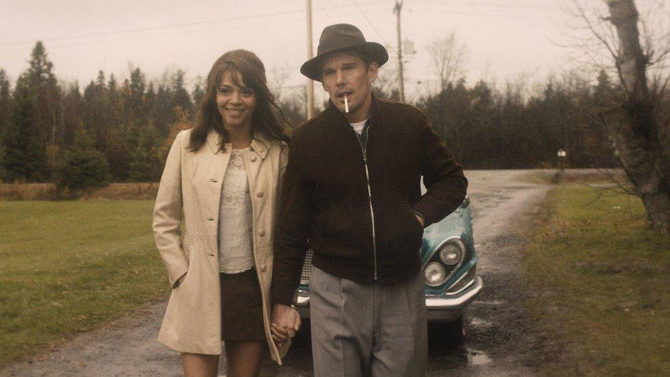 Like Miles Ahead, Born to Be Blue is less conventional than the Rays and the Walk the Lines. I know less about Chet Baker than I do Miles Davis. “My Funny Valentine” may be the single Baker fact I possessed prior to seeing Born to Be Blue. Recounting the acclaimed trumpet player’s comeback after a drug-related beating destroyed his front teeth and his all-important embouchure rather than his entire life story, Born to Be Blue offers more of a single snapshot rather than a home movie. The film will not make anyone an expert in all things Chet Baker. Instead, filmmaker Robert Budreau fosters an appreciation for the work Baker put into reclaiming his greatness despite his addiction. Unlike most other musical biopics, we get to skip the inevitable drug-induced downfall and ride the high of his subsequent success.

As Baker, Ethan Hawke benefits from portraying a famous figure whose face and voice are unfamiliar to most viewers. Who knows whether or not he impressively impersonates Chet Baker? Instead, he simply gets to give another much-admired performance. Again, like in Miles Ahead, fact and fiction are blurred to the point that their separation does not matter. Born to Be Blue tells a solid narrative about a junkie musician getting a second chance. That tale is much more intriguing than the rehashed rise-and-fall motif used in every other tired musical biopic.