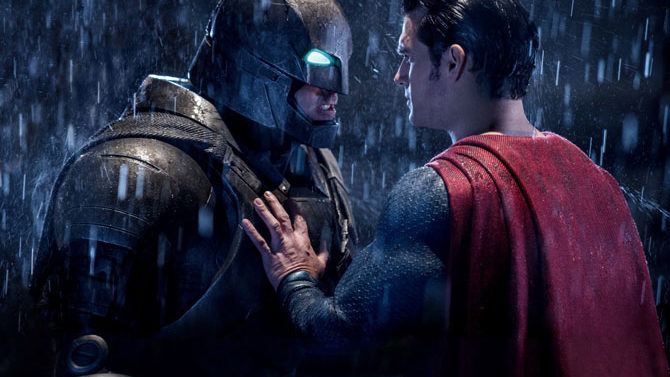 The main event is finally here. Batman battles Superman in the Superhero Bowl. What results is two-and-a-half hours of the least fun you can have at a comic book movie, which is not to say Batman v Superman is a complete failure. The titanic battle royale of the final act lives up to expectations, but getting to that climax is a trying endeavor thanks to a mopier-than-usual Batman as well as the least super Superman ever captured on film. (Even the worst Superman movie of all time, Superman IV: The Quest for Peace, had its perfect Man of Steel in Christopher Reeve.)

Writers Chris Terrio (an Academy Award winner for Argo) and David Goyer (The Dark Knight Trilogy and Man of Steel) create an intriguing frame upon which to build a Superman-Batman rivalry. In Metropolis for the day, Bruce Wayne (Ben Affleck) was present to witness Man of Steel’s catastrophic battle between Superman (Henry Cavill) and General Zod. Like many Super-fans, Wayne is disturbed by Superman’s godlike power and his seeming lack of concern for collateral damage. On the other hand, Superman worries that Batman’s brand of vigilante justice will spread outside of the Gotham city limits. Meanwhile, Wonder Woman (Gal Gadot) is in town, which helps our heroes once the plans of Lex Luthor (Jesse Eisenberg) come to fruition.

For nearly two hours, Batman and Superman battle to see who’s the most emo. An inspired choice for an older Bruce Wayne, Affleck also has a good Batman voice (much less growly than Christian Bale’s). Unfortunately, he mostly gets to frown and brood about Superman (jealous much?). Even Jeremy Irons’ Alfred seems to think Wayne is a big old stick in the mud. Supes is not much better, way too fretful about a masked vigilante for a guy who saves the world on a regular basis. Whoever wins, the audience loses thanks to all that unnecessary angst.

It is hard to care who wins when the motivations are so transparently forced. By the movie’s end, Batman should be ashamed for falling for Luthor’s bald-faced machinations. The moment that breaks the spell is laughably ludicrous, too, though it does give direct cause for the movie’s best sequence. Batman’s assault on criminals holed up in a warehouse shows the awesome potential held within this frustratingly constrained piece of portentous superhero filmmaking.

Perhaps that is Batman v Superman’s supreme failing. Greatness seems only a sense of humor and a character reworking away. Affleck and Cavill are excellent versions of these iconic heroes, though Wonder Woman steals the show in her brief appearance in full costume. I anticipate her solo outing more than the promised Justice League movie; just try not to laugh as BvS ham-handedly sets up that flick.

The final showdown does unleash the titanic power of DC’s greatest superheroes, and the experience is awesome. It’s just too late to save us from the dreary setup and a truly awful performance by Eisenberg, whose Lex Luthor has ruined the central villain of the DC Extended Universe. Thanks for that, Zack Snyder and company. What childhood dream do you plan to spoil next?