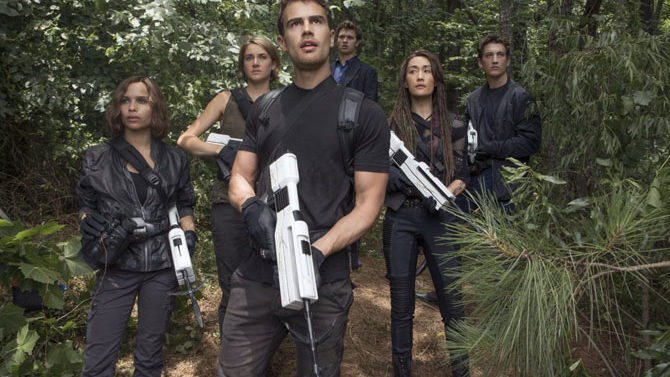 So The Divergent Series is over now, right? Apparently not, as the franchise based on Veronica Roth’s increasingly poor YA novels becomes the latest book series to be adapted into one more movies than there are books. As if the prospect of another Divergent movie was not unfortunate enough, the third movie, Allegiant, does not come close to deserving an expansion, especially when the first part seems to complete Tris’ three-part tale a lot more kindly than Roth herself did.

After the rebellious events of Insurgent, Tris (Shailene Woodley) longs to go beyond the walls of Chicago. Naturally, her tough boyfriend, Four (Theo James), plans to follow her, but his mean old mom, Evelyn (Naomi Watts), leader of the Factionless that defeated Erudite and their leader, Jeanine, will not let anyone leave Chicago. Eventually, Tris, Four, her traitorous brother Caleb (Ansel Elgort, Woodley’s cancer victim boyfriend in The Fault in our Stars), Peter (Miles Teller, Woodley’s boyfriend in the Athens-filmed The Spectacular Now) and Christina (Zoë Kravitz) find their way out of the city and run into some survivors led by David (Jeff Daniels). Sidebar: Why do the protagonists keep trusting that snake Peter? No acceptable explanation exists outside of Teller’s occasionally charming delivery of terribly unwitty dialogue. When Tris and her gang learn the truth behind David’s motivations, they must return to Chicago and save everybody from a fate fairly similar to the one from which they were saved in Insurgent.

Much like Roth’s books, the Divergent film franchise gets worse as contact with it is prolonged. Director Robert Schwentke manages to come up with a couple of interesting ways to convey what is happening in the characters’ minds, i.e. the memory serum, but the movie loses its battle with Roth’s weak world-building and poor narrative roadmap. The performers seem as bored by events as the audience. James has a calming, stalwart presence and would benefit from another, better franchise (maybe one based on Pierce Brown’s Red Rising?). Woodley needs to cash her checks and move on to greener pastures, too. Unfortunately for us all, the franchise will allegedly continue in The Divergent Series: Ascendant.