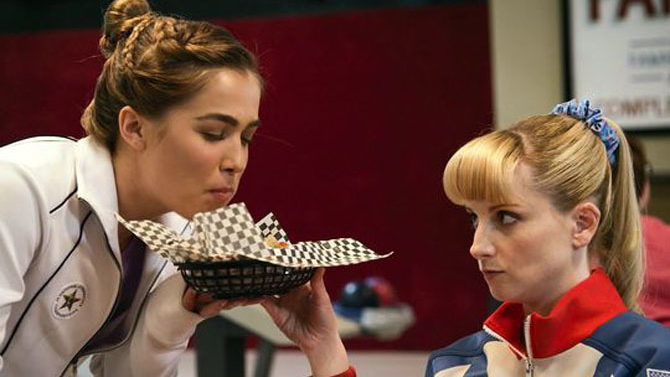 Sadly, most filmgoers will miss this weakly marketed, vulgarly comic feature from writer-star Melissa Rauch, best known as Bernadette Rostenkowski from CBS’s way too popular “The Big Bang Theory.” Rauch and her collaborators, Winston Rauch and director Bryan Buckley (an Oscar nominee for the short, “Asad”), share the raunchy sports spirit of Jody Hill/Danny McBride/Ben Best’s “Eastbound & Down” in this story of foul mouthed gymnast Hope Ann Greggory, the bronze medalist at the 2004 Olympics in Rome. The pride of Amherst, OH continues to coast on the fumes of her celebrity while her exasperated mailman father, Stan (Gary Cole), despairs at the awful adult he has raised. A tragic event lends Hope the chance to turn her life around by coaching aspiring Olympian Maggie Townsend (Haley Lu Richardson). Is Hope mature enough to give up her chance at free Sbarro by helping Maggie win the gold medal she herself was denied by a Kerri Strug-like injury?

The Bronze has so many opportunities to go astray, but Rauch and her co-writer husband take the right turn at nearly every fork in the storytelling road. They write Hope as dumb but never too stupid. She is filthy without being gross. They smartly zig where you fear they might zag, especially in the final act where many similar comedies would blow up their character for the sake of further dramatic complications. Hope’s arc is obvious but satisfying. Though the movie, like its protagonist, has the potential to be thoroughly unlikable, laughter abounds, even when the goal appears to be vulgarity rather than wit. Pleasant support from Cole and Thomas Middleditch (so funny on HBO’s excellent “Silicon Valley”) make up for the movie’s supposed-to-be-unpleasant antagonist, Tucker Lewis (Sebastian Stan, the MCU’s Winter Soldier, Bucky Barnes). Too bad no one will see the movie; here’s hoping it sticks its landing when it moves to a friendlier medium.