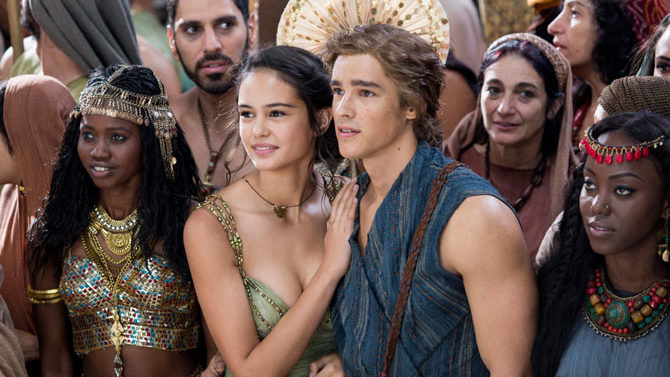 Even before the racist casting controversies and apologies, Gods of Egypt looked like a hard sell. Its trailers conjured similar feelings as those of Jupiter Ascending, and this Egyptian mythology flick has definite signs of Wachowski-ism. In ancient Egypt, the gods and man co-exist, although the gods are giants with gold for blood; this idea in execution looks even sillier than it sounds.

On the day that Horus (Nikolaj Coster-Waldau, HBO’s “Game of Thrones”), the son of Osiris (Bryan Brown), is to be crowned the new king of Egypt, Osiris’ bitter brother, Set (Gerard Butler, channeling mean, spiteful Leonidas), proves to be a bad bro. Fortunately, an Aladdin-ish thief, Bek (Brenton Thwaites, Maleficent’s Prince Phillip), teams up with the now one-eyed Horus to overthrow the god’s evil uncle and save the young mortal’s true love, Zaya (Courtney Eaton, Cheedo the Fragile from Mad Max: Fury Road), from the afterlife.

Gods of Egypt has the potential to be lots of silly fun but winds up too often being a videogame-inspired experience that one would prefer to play than watch. The ability of the gods to transform into metallic animals—Horus resembles one of the ‘80s children’s cartoon characters called the Silverhawks—feels as cribbed from several wild Japanese action games as the narrative feels cribbed from the several Greek myth-movies.

Gods of Egypt has more fun with its Prince of Persia action mechanics than either the new Clash or Wrath of the Titans. Director Alex Proyas has displayed hints of genre greatness; The Crow will forever have mythic cult status, and Dark City remains severely underwatched. Yet Gods of Egypt will do more to impede his future filmmaking endeavors than his last movie, the 2009 Nic Cage conspiracy thriller you forgot about, Knowing.