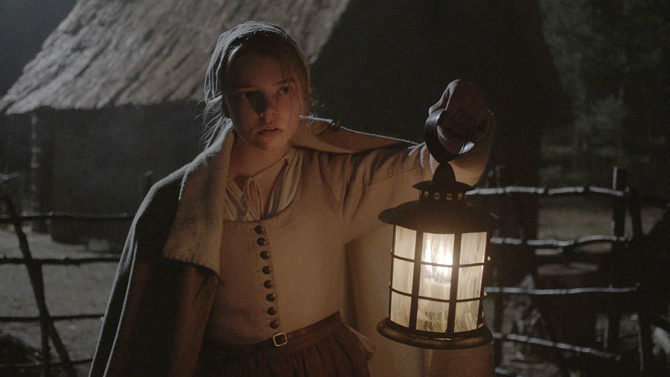 The horror genre has been experiencing a burst of creativity thanks to an independent filmmaking community bolstered by alternate options for release. However, The Witch is one of the truest horror films to get a wide theatrical release in years. Set in an unsexy period, with a deliberate pace that is never tarrying, Robert Eggers’ first feature film has none of the characteristics of the studio horror movies that pander to the genre’s teenage demographic. Not even last year’s excellent It Follows can claim as much. The Witch is adult horror at its most remorselessly terrifying, and it might become more terrifying the older its audience gets, to a point.

Set in the pious New England of the 1630s, The Witch begins as a family, led by patriarch William (Ralph Ineson, probably best remembered as the awful Chris “Finchy” Finch from the British “Office”), is banished by its community’s religious leaders. (Audiences will probably recognize familiar face Julian Richings.) They build a farm on the outskirts of a forest and struggle along until tragedy strikes. Then, in true Puritan fashion, the devout parents (including Kate Dickie, who already played crazy on HBO’s “Game of Thrones” as Lysa Arryn) trot out baseless accusations of witchcraft against their own children—teenage Thomasin (Anya Taylor-Joy), Caleb (Harvey Scrimshaw) and twins Mercy and Jonas (Ellie Grainger and Lucas Dawson). Soon, The Crucible meets the McMartin trial as proverbial and literal hell break loose in the family home.

The Witch favors shocking violence (not necessarily seen) against children over overt acts of gratuitous jump scares and continues to increase the heat of tension until the audience is as cooked as the family. Not that The Witch is a chore to behold. Eggers and cinematographer Jarin Blaschke conjure up terrible, lingering imagery. The performances are period perfect; the dialogue is often so antiquated as to be difficult to comprehend.

Such indulgences require a closer viewing than the ones to which modern horror audiences have become accustomed. Yet Eggers strikes an impressive balance between his esoteric independence and his film’s accessibility. It does not hurt that audiences cannot claim the film failed to deliver the horror goods; it is as scary as it is excellently crafted, and Black Phillip may be the genre’s first breakout icon since Jigsaw.

Please go see The Witch. The theatrical viability of horror films built for more than a weekend of success before bad word-of-mouth circulates will do wonders for this oft-maligned genre that has proven over the years to be capable of producing more than slasher, haunted house and possession copycats. Just do not take this horror heavyweight’s terrors lightly; you have been warned.