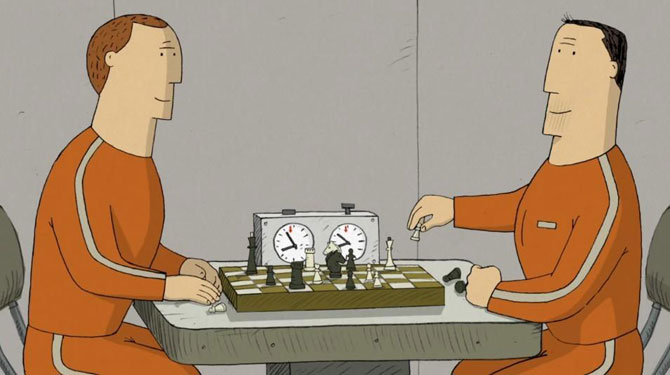 The animated short films nominated for this year’s Academy Award hail from the United States, the United Kingdom, Chile and Russia. Of course, one of the two entries from the United States is the latest Disney-Pixar short, Sanjay’s Super Team. Filmmaker Sanjay Patel tackles familial love and religious bonds in a tiny, kinetic, computer-animated action film.

Gabriel Osorio Vargas’ Bear Story, aka Historia de un oso, could generously be called this year’s most gorgeously animated nominee. The story of a lonely bear dealing with his sadness by replaying his sad life to young bears via a windup diorama never connects as strongly as it impresses.

The most entertaining entry is the U.S.’s World of Tomorrow, from director Don Hertzfeldt. It uses humor to recount a future where a person’s consciousness is uploaded into clone after clone, leading to eternal existence. The interactions between a future clone and her source as a young girl lead to an aura of “Portal“-like humor. Too bad there is no cake.

Russia’s We Can’t Live Without Cosmos is one of the two strongest nominees. Two cosmonauts, lifelong friends, have a friendly competition to see who will go into space first. However, tragedy leads both men into orbit. Traditional animation and a narrative with both heart and humor make Konstantin Bronzit’s more old-fashioned animated short stand out.

The UK’s Prologue, from veteran animator Richard Williams (Who Framed Roger Rabbit), is probably the best, but it is also easily the most polarizing. A violent clash between two Spartan and Athenian duos includes bloody deaths and full-frontal male nudity. Its photorealistic imagery makes the short all the more visceral, as well as refreshingly different.

As always, the producers beef up the program with a handful of “Highly Commended” animated shorts as well: Cordell Barker’s If I Was God; a new Plymptoon, The Loneliest Stoplight; a Scrat knockoff from France called Catch It; and my favorite of all the shorts, The Short Story of a Fox and a Mouse. I am not sure how that film did not get nominated.