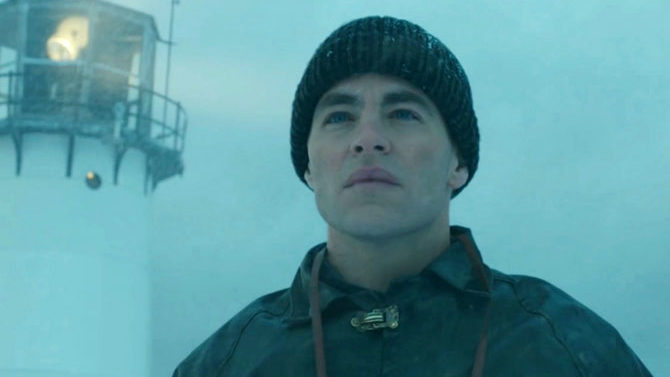 In February 1952, a massive “nor’easter” was battering the coast of New England and had split two oil tankers in half. While the majority of the region’s Coast Guard forces were massing to rescue the men from the SS Fort Mercer, four Coast Guard members—Bernie Webber (Chris Pine), Richard Livesey (Ben Foster, a fine young character actor who has transitioned from playing psychos to soldiers), Andy Fitzgerald (Kyle Gallner, remembered from his stint on “Veronica Mars”) and Ervin Maske (John Magaro, The Big Short)—stationed out of Chatham, MA, a tiny hamlet close to Cape Cod, staged a daring rescue of the 32 men trapped on what remained of the SS Pendleton.

The stirring adventure movie directed by Craig Gillespie (Lars and the Real Girl and the unfairly overlooked Fright Night remake) recounts the concurrent dangers faced by that heroic quartet and the Pendleton survivors, best represented by Casey Affleck’s engineer Ray Sybert, who plots to run the ship aground to buy enough time for a rescue party to find them.

As much as the movie wants Pine and the other Coast Guardsmen to be the focus, it is Affleck’s powerfully stoic performance that commands the movie. Every time the scene shifts back to Chatham to deal with the outpost’s new, out of place commander (Eric Bana, sporting a Southern accent more noticeable than believable) or Miriam (Holliday Grainger), the strong-willed telephone operator who turned the tables by proposing to Bernie, one wonders what the men on the Pendleton are doing. Even the watery obstacles faced by Bernie and his crew are too murky to comprehend as fully as those of the sinking Pendleton.

Gillespie stages the disaster and the rescue with such period accuracy, you might mistake it as a movie decades older than it is, were it not for the contemporary visual effects. Even the stolid performers seem from another generation. Affleck, in particular, gives an aged performance, reminding audiences again how he can quietly dominate a scene. As Bernie, haunted by a failed rescue in his past, Pine is far from the brash young Captain Kirk of the new Star Trek series. The Finest Hours may be a bit hyperbolic, but it is certainly a fine way to spend a couple of hours.