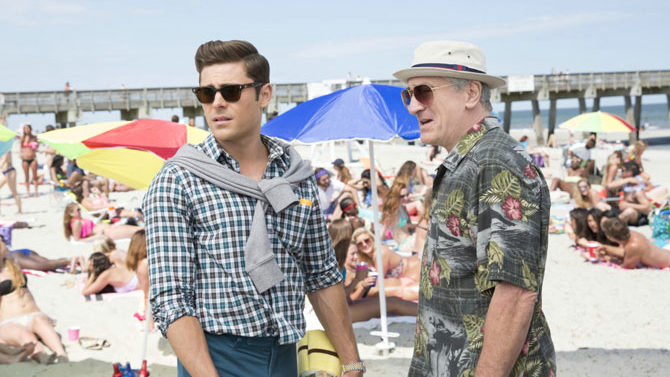 2016 has its first truly repellant movie. Dirty Grandpa feels as if a filmmaker saw Jackass Presents: Bad Grandpa and decided it would be better with Robert De Niro. It is not. Zac Efron plays a modern yuppie, Jason, a lawyer about to marry a demanding young lawyer from the right family (Julianne Hough). After his grandmother dies, Jason’s grandfather, Richard (De Niro), asks his grandson to drive him to Boca for a yearly trip the older couple always took. En route, Jason learns his grandpa is a horny old bugger looking to bag a young hottie. His target is a raucous coed played by Aubrey Plaza, who just so happens to be friends with a young hippie, Shadia (Zoey Deutch), who knew Jason when he was a photography student.

The movie, written by John Phillips, who is unfortunately writing Bad Santa 2, thinks a gag is funny because it is offensive; instead, it is simply offensive because it is so rarely funny. The best critique came from the college coed behind me who apologized to her friends for recommending the movie.

De Niro is merely cashing checks at this point, but this flick is worst than most of his recent fare. Efron flashes his rock hard body a lot. Jason Mantzoukas gleefully delivers funnier, more offensive lines as Rafi on “The League”; he probably earns more laughs than any other performer. Adam Pally (“Happy Endings” and “The Mindy Project”) is just plain sad. The Atlanta setting, with talk of universities in Georgia and Florida, will be scoffed at by Athens audiences, as the Georgia mascot is a hornet and the logo that of Georgia Tech (Florida is the Tigers). It is highly unlikely anyone will like this movie.