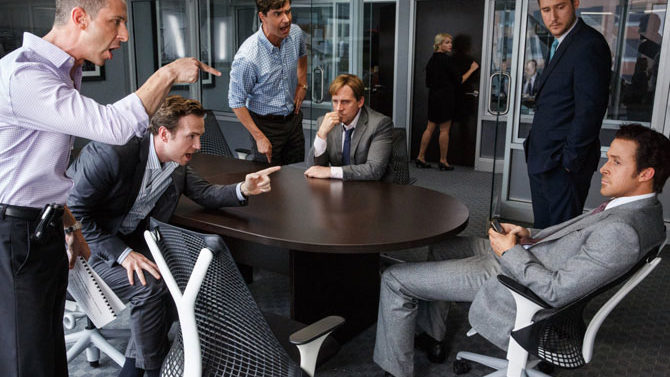 When Adam McKay burst on the scene with Anchorman, absolutely no one thought the filmmaker would one day be a two-time Academy Award winner. But along with co-writer Charles Randolph, McKay has turned Michael Lewis’ bestseller into an entertainingly informative lesson on the 2008 economic collapse.

Apparently, the crisis should not have been so surprising, considering a motley crew of financial outsiders—former medical doctor Michael Burry (Academy Award nominee Christian Bale), apoplectic hedge fund manager Mark Baum (Steve Carell, who could have been nominated for an award), sleazy Wall Street trader Jared Vennett (Ryan Gosling) and retired banker Ben Rickert (Brad Pitt), who represented two unknown investors (John Magaro and Finn Wittrock)—figured it out and made a killing by shorting the housing market.

The stellar ensemble shines, and McKay smartly intercuts explanations by Margot Robbie (in a bubble bath) and Anthony Bourdain to make the more complex economic concepts easier to digest. Do not be scared off by the seemingly complicated content; The Big Short is like the financial collapse for dummies—without really dumbing it down too much. The film succeeds more with clarity than simplification. And attractive, charismatic actors; never underestimate the educational power of Hollywood stars, even when there is a huge chance they do not understand the subjects about which they are talking. You probably were not meant to enjoy a financial tutorial this much, especially when it recounts the catastrophic, greed-fueled near-collapse of the entire world economy.