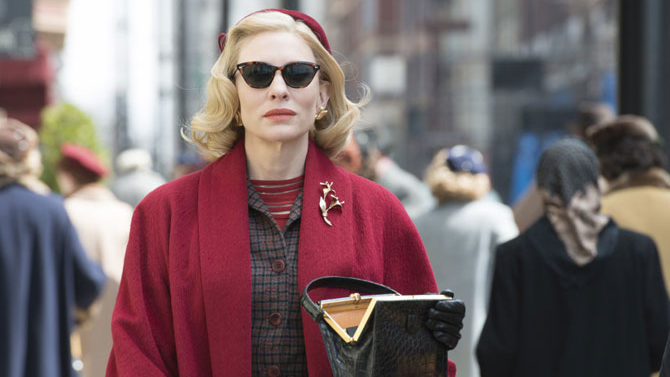 Todd Haynes has sown up his reputation as the modern day Douglas Sirk, Hollywood’s king of melodrama and a role possibly only sought by Haynes. As 1952 gives way to 1953, Carol Aird (Cate Blanchett) is trapped in a loveless marriage with her wealthy husband, Harge (Kyle Chandler). In the midst of a custody battle, she falls passionately for young, aimless Therese Belivet (Rooney Mara), a relationship that could cost Carol her daughter, Rindy.

Phyllis Nagy’s adaptation of The Price of Salt, written under a pseudonym by Patricia Highsmith, who created Tom Ripley and Strangers on a Train, provides Haynes with a wonderfully supportive framework upon which to build a beautiful film about love conquering all. The two leads, Blanchett and Mara, develop an interesting chemistry in the rare cinematic matchup of older and younger woman—though 2015 did provide at least one other high-profile pairing in Grandma with Lily Tomlin and Judy Greer.

Mara gives off a particular period air of Audrey Hepburn. She ensures Therese’s feckless youth does not devolve into disgust. Blanchett is ever a wonder on screen, be it as the queen of England or of a mid-century New York household. She seems no less directionless than her young lover but does not deserve the cruelty dealt to her for her forbidden love.

Critics will love Carol for its beautiful performances, supported so well by the perfect period attire, hair and makeup, as well as Haynes’ strength of vision; one hopes audiences will discover its charms amidst its louder Oscar-bait competition (I’m looking at you, Revenant).