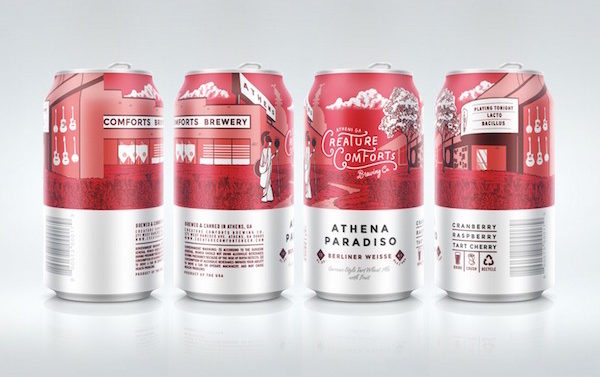 Creature Comfort Brewery’s first limited release of 2016 will be Paradiso, a fruity version of its Athena berliner weisse.

Germans frequently drink their sour beers with fruit syrup, and in the past Creature Comforts has brewed variants on Athena (a tart wheat beer) with guava and passionfruit and tart cherries. (The fruit is added in the fermenting stage.) This one will include cherry, raspberry and cranberry flavors.

Paradiso (4.5% ABV) will replace another limited release, the milk porter Koko Buni, in the brewery’s lineup come February. It will be available on draft and in 12-ounce cans in Athens and Atlanta.

Meanwhile, Southern Brewing Co. will hold a release party for its Ironmaker kolsch (a light German style) Wednesday, Jan. 20 from 6–9 p.m. at The Foundry.

Co-founder Brian Roth graduated from UGA with a degree in bronze casting, and his original career goal was to reopen the Athens Steam Co. as an art foundry.

The building later became the restaurant and music venue once known as The Melting Point and now The Foundry.

As with Creature Comforts and Paradiso, SBC plans on using Ironmaker as a base to experiment with fruit flavors, primarily Southern varieties sourced to farms in the Athens area.

Over at Terrapin Beer Co., as we mentioned last week, they’ll be hosting their annual Wake-n-Bake cookoff Sunday, Jan. 24 and 31.

My Morning Jacket, Jane’s Addiction, Florence and the Machine to Play Shaky Knees 2016