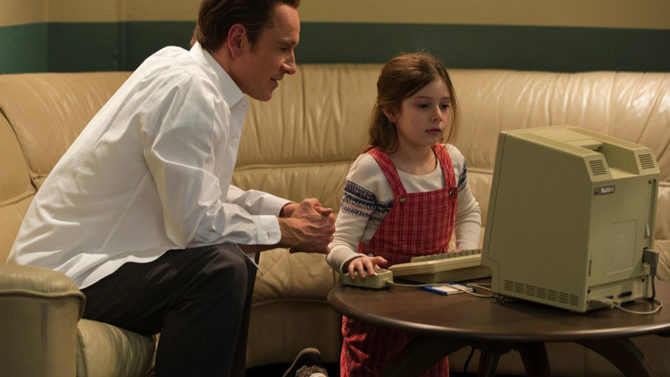 For the people who missed the Ashton Kutcher-starring Jobs or the documentary recently screened at Ciné, Steve Jobs: The Man in the Machine, Danny Boyle and Aaron Sorkin have teamed up to tell us again how revolutionary Apple co-founder Steve Jobs was. Boyle and Sorkin’s biopic is fascinatingly structured, taking place at three seminal PR moments in Jobs’ career, and greatly benefits from Michael Fassbender’s spot-on portrayal. (In all fairness, Kutcher did not completely suck as Jobs; his movie just felt more made-for-TV.) Kate Winslet seems to play Jobs’ conscience, Joanna Hoffman, a biopic role that always feels made up; apparently, the real Hoffman did encourage Jobs to be a better father to Lisa, the daughter he did not claim until she was three. Other real-life players include Jobs’ Apple co-founder Steve Wozniak (Seth Rogen, giving his all in a high-profile award magnet), former Pepsi CEO John Sculley (the always fascinating Jeff Daniels) and Andy Hertzfeld (the still criminally overlooked Michael Stuhlbarg).

Sorkin based his script on Walter Isaacson’s biography, and he smartly focuses on these handful of moments, rather than trying to show us everything that ever made Jobs the creative asshole he apparently was. Boyle’s direction is uncharacteristically inert and lacks the kineticism that highlights his strongest efforts. We probably will not get a better biopic on Steve Jobs, but did we need this many to begin with?