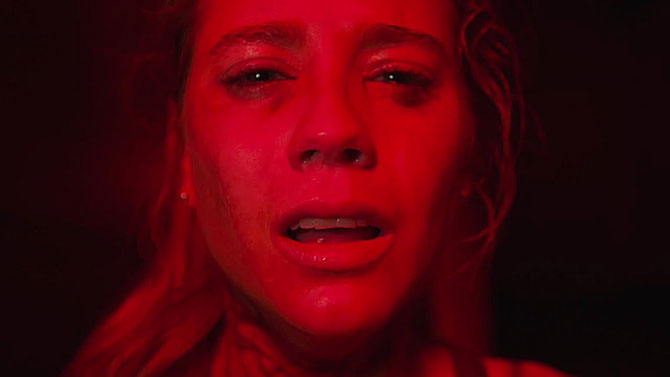 How do I justify the new, vaguely effective, found-footage horror flick from Blumhouse, the producers of Paranormal Activity, Insidious and more, when The Gallows stumbles in some pretty obvious ways? Well, the movie makes the job a lot easier by generating some genuine terror and tension, unlike many of its FF peers, thanks to its chill-inducing locale, a high school at night. Long, dark hallways are lined with doors that could creak open at any moment or reveal the slow approach of a shadowy figure. The potential is so much more terrifying than the limiting suburban home of Paranormal Activity, itself an effectual horror location.

As found-footage plot engines go, The Gallows’ backstory intrigues. Twenty years earlier, a young man named Charlie died in a freak accident during the high school production of a play called “The Gallows.” It does not take much of an imagination to figure out what happened to the young thespian. For no good reason, the drama club looks to restage this tragic play, and for very poor reasons, Reese, Ryan and Cassidy steal into the school at night to sabotage the production in the hopes of saving it.

A vengeful destruction à la Carrie by punished bad kids would have been a better fit, especially as unlikable as writing-directing duo, Travis Cluff and Chris Lofing, sketch Ryan and Cassidy. Much like April’s also not awful Unfriended, these teen victims fail to generate much sympathy. Call it Eli Roth Syndrome: It’s scarier to care for who’s dying.

The camerawork is some of the most nauseating since Blair Witch, and the characters pretty much get what is coming to them. Without spoiling too much, Ghost Charlie’s suddenly murderous motivations—he has been haunting the auditorium for two decades without major incident—seem too unfocused. Even the worst 80s slasher flicks were typically propelled by more tightly concentrated vengeance. Still, The Gallows gets one big thing right. It’s scary. A scary horror movie can be forgiven myriad other flaws.