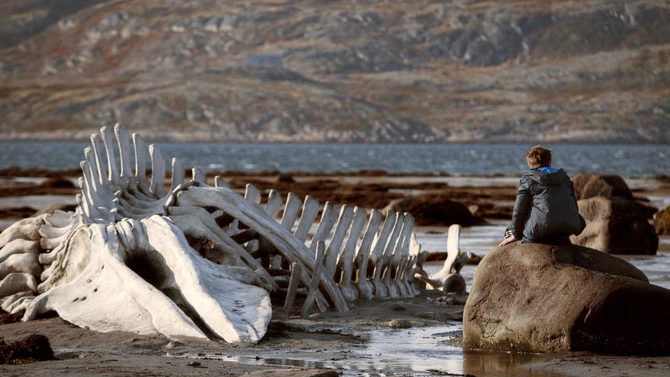 Kolya (Aleksey Serebryakov—think of a Russian Michael Shannon) is going to lose his home to corrupt local mayor Vadim (Roman Madyanov), so he enlists his old army buddy, Moscow lawyer Dmitriy (Vladimir Vdovichenkov) to dig up some dirt in the hopes of convincing Vadim to relinquish his claims.

Kolya’s situation only worsens from there, as he goes to jail, and his family—pretty young wife, Lilya (Elena Lyadova), and teenage son, Roma (Sergey Pokhodaev)—fractures. One might think a 140-minute Russian domestic drama would grow dull, but Leviathan is one of the most stunningly mesmerizing tales to hit Athens’ cinema this year. Imagine a massive work of Russian literature writ on the big screen, for that is what filmmaker Andrey Zvyagintsev offers. What seems a trite plot complication—the only real criticism I can levy—proves necessary for the film’s gloomy narrative resolution. Do not be frightened off by its length or its country of origin; Leviathan is simply one of the most complete, accomplished films currently available and is not to be missed.