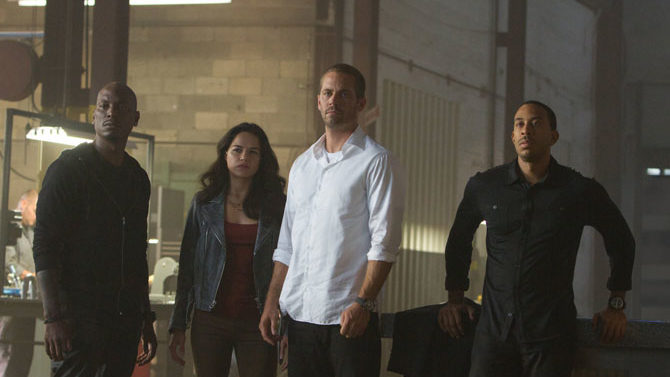 Movies do not get much louder and dumber than Furious 7, and it is fantastic. Vin Diesel’s Dominic Toretto and crew (including the late Paul Walker in a fitting final appearance as Brian O’Conner) have somehow parlayed their sick driving skills into careers as special operatives for the blackest corners of the U.S. government, represented by Kurt Russell’s Mr. Nobody, who needs a part in each subsequent adventure.

Seriously, what else do Dom, Brian, Letty (Michelle Rodriguez), Roman (Tyrese Gibson) and Tej (Ludacris) really do? Their street fighting skills seem trumped up; is Letty really a match for Ronda Rousey? Conjuring director James Wan does admirable work in his first attempt at wrangling the fast world of the Furious franchise, though one wonders what writer Chris Morgan’s script actually looks like. A bunch of vague, action-y stage directions and unbelievably lunkheaded lines for Dwayne Johnson’s Hobbs? The unbelievable vehicular stunts and action choreography feel more natural than scripted; obviously, the behind-the-camera crew deserves loads of credit for the massive success of these larger than life movies.