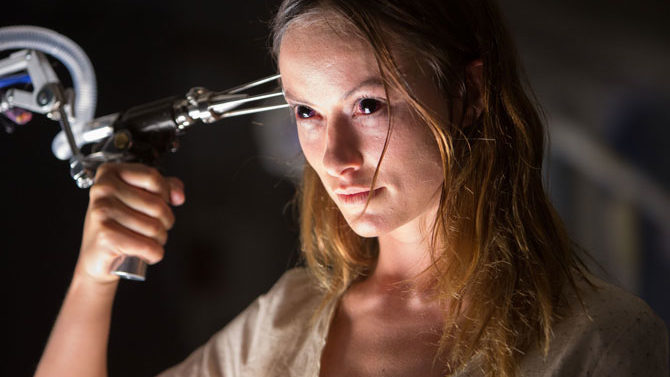 Raise your hand if you would have guessed that the director of Jiro Dreams of Sushi would direct a horror movie starring Mark Duplass and Donald Glover. Well, The Lazarus Effect has such an odd pedigree, and it does not help this run-of-the-mill horror flick to stand out from the genre dreck.

What seems like a Flatliners rip-off ends up being more like a Stephen King rip-off, when it’s really just ticking off the standard possession tropes.

Some scientists (Olivia Wilde, Duplass, Glover and Evan “American Horror Story” Peters) have created the formula to bring the dead back to life, but something happens to the subjects between death and reanimation. First, it’s just a super-aggressive dog, but when they bring back Wilde’s Zoe, the situation gets much, much worse. She has some sort of King-y telekinesis-cum-paranormal activity.

The scares are solely of the jump variety, which pleases its target teen demographic, but the cast could have made much more of these generic boos. The flick looks and feels like it’s been seen and done before. And whatever preceded it was certainly better. Worse horror movies are out there, but none are much more boring. For more fun, check out Shakma, the killer baboon loose in a hospital “gem” with which the screenwriters of Lazarus clearly had to be familiar.