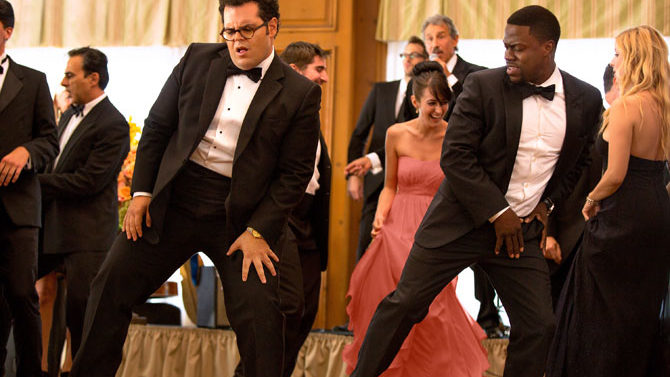 Funnyman Kevin Hart does not have a complete winner on his hands with The Wedding Ringer, but the romantic comedy—light on the rom, heavy on the com—has some genuine laughs. Hart and his second, Josh Gad, will warm up a cold winter night at the theater, or, more likely, at home, once this flick hits home delivery.

The high concept involves friendless Doug (Gad), who is marrying beautiful, probably stuck-up Gretchen (Kaley Cuoco-Sweeting of “The Big Bang Theory,” a show whose success no one can explain to me). The wedding is in two weeks, and Doug has yet to find any groomsmen! Uh oh! Enter Hart’s fast-talking Jimmy Callahan, whose company specializes in fake friendship. For a fee, he will be your best man and more for a limited time; though for a nominal fee, he will include future holiday, birthday and anniversary contact.

There are some misguidedly unfunny and lengthy sequences, such as the old dudes vs. young dudes football game featuring Doug’s intimidating, racist future father-in-law (Ken Howard) and pro football hall of famers Joe Namath, John Riggins and Ed “Too Tall” Jones. Such scenes make this flick a less than brisk 101 minutes, but The Wedding Ringer is more often funny than not.

A stronger supporting cast would have helped. The oddball guys rounded up to be Doug’s groomsmen barely rate a mention, and those roles had potential. Cloris Leachman and Olivia Thirlby are also wasted as a burned-out grandma and an unnecessary love interest for Jimmy. Good thing Hart and Gad are exceptionally funny.