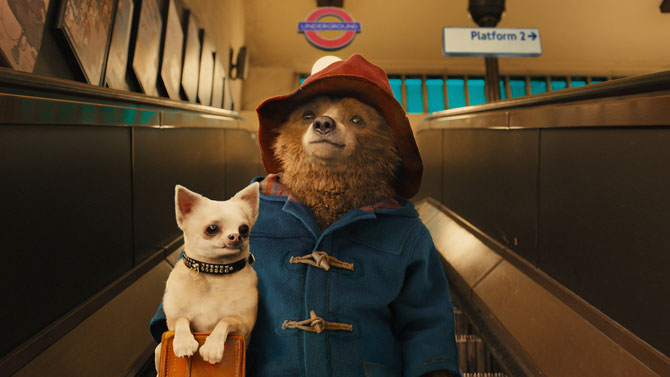 What a lovely little movie! Writer-director Paul King (the odd Britcom “The Mighty Boosh”) has crafted a surprisingly innovative children’s film that possesses a sense of whimsy Wes Anderson could appreciate. At Paddington Station, a young bear from Darkest Peru is found wearing a hat and a note reading “Please look after this bear. Thank you.” Led by an overprotective patriarch (“Downton Abbey’s” Lord Grantham, Hugh Bonneville), the odd Brown family takes the bear home and names him “Paddington.” As in the Michael Bond classics, Paddington finds himself in unexpected trouble. Some of these sequences play a bit too broad, but the sly dialogue, performances and direction elevate Paddington above most adaptations of classic children’s literature.

Ben Whishaw (James Bond’s new Q) voices the titular character with surprisingly quiet sweetness and thoughtfulness. Bonneville acquits himself superbly as the de facto human star—though I guess that role belongs to the villainess, played by Nicole Kidman by default. Sally Hawkins, the wonderful heroine from Mike Leigh’s Happy-Go-Lucky, is the spellbindingly charming member of the human family. Her Mrs. Brown is disarmingly delightful. Truly, the whole film could be described as such. Even the unnecessary bear-napping and worse subplot involving Kidman’s insidious taxidermist is forgivable.

Much is expected of the very British supporting cast, and Julie Walters (strict, loyal Mrs. Bird), Jim Broadbent (sweet old Mr. Gruber), Matt Lucas (a humorously brief turn as a cabbie) and Peter Capaldi (mean old Mr. Curry) add wonderful character to this unquestionably adorable film. It’s as rare as this unlikely anthropomorphic hero immediately to desire a sequel to a children’s movie, but Paddington demands one, because it is so much smarter than your average animated-bear film.