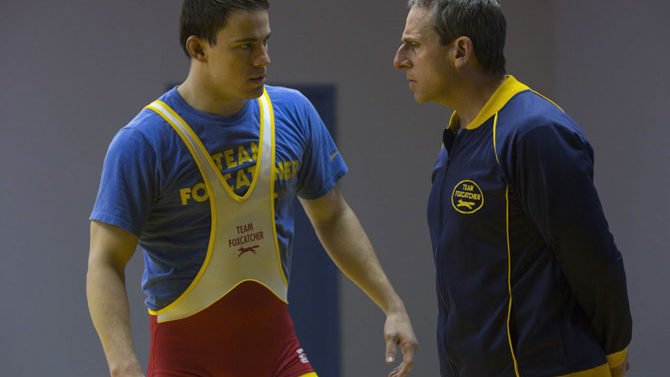 With nominations in the major categories of Best Director, Best Actor, Best Supporting Actor and Best Original Screenplay, Foxcatcher’s lack of a Best Picture nod is one of the more head-scratching snubs in a year filled by odd decisions by the Academy. (All-white actors for only the second time in since 1998? No Best Animated Feature nomination for The Lego Movie? Selma’s good enough for Best Picture, but its acting, direction and writing were merely meh?)

But Foxcatcher’s snub is only stranger, considering only eight films were nominated, and the Academy loved this odd, sad true story so much, otherwise. Steve Carell, enjoying his first Oscar nomination, packs on the makeup to portray the heir to the du Pont dynasty. John E. du Pont developed a fascination with wrestling and created Team Foxcatcher with the Olympic Wrestling Champion Schultz brothers, David and Mark (Best Supporting Actor nominee Mark Ruffalo and Channing Tatum, who gives a performance equal to either of his nominated costars). Weird people weirding out together is a good way to describe the bulk of the film, which chronicles the unlikely friendship of Mark and John du Pont, until it ends in an even stranger, motiveless murder.

In his third film, director Bennett Miller again impresses, earning his second Oscar nomination for this quiet, confidently paced film. Carell deserves all the awards attention; despite his near Gru-like appearance, he disappears into John du Pont, proving again just how fantastic comic actors can be. Some, including Mark Schultz himself, have taken umbrage at the liberties indulged by Miller and screenwriters E. Max Frye and Dan Futterman to craft a compelling narrative (The Imitation Game has suffered the same critiques), but in a silly season stuffed with excellently told true stories, Foxcatcher stands out due to its peculiarity.