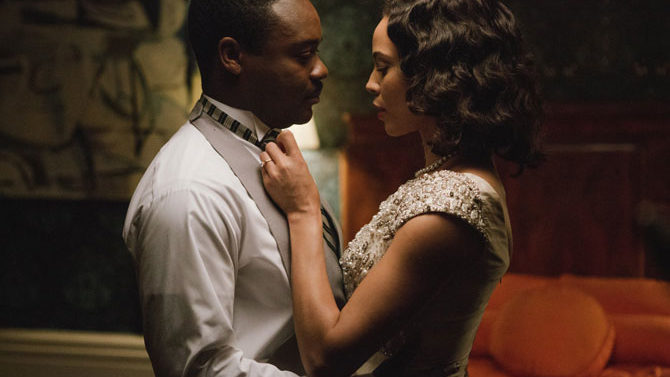 To call director Ava DuVernay’s Golden-Globe-nominated dramatic feature “powerful” feels clichéd and simple, but this dramatic reenactment of the lead-up to and the march on Selma led by Martin Luther King, Jr. (Golden Globe nominee for Best Dramatic Actor David Oyelowo) and the SCLC is exactly that: powerful.

The potential to sentimentalize and aggrandize this historic moment in the Civil Rights Movement would overwhelm most other filmmakers. DuVernay (also nominated for Best Director) and first-time screenwriter Paul Webb do not shy away from the brutality and the violence of this period; the venomous hatred shown by many Southern leaders is on full display, be it Dallas County Sheriff Jim Clark or Alabama Gov. George Wallace—Tim Roth, whose performance is one of the few that fail the film. His mimicry of Wallace miscalculates the politician’s uncanny populist appeal.

DuVernay and Webb also address, if briefly, MLK’s infidelity, a Shakespearean flaw still difficult to reconcile with his popular, heroic image. Oyelowo overcomes his weak resemblance to a figure whose countenance is familiar to all audience members (at least above a certain age) with MLK’s powerful, captivating chemistry, especially as a public speaker. The speeches make Oyelowo seem most like King.

But the quiet moments, when the SCLC brotherhood, including Ralph Abernathy (Colman Domingo), Andrew Young (Andre Holland, who uncannily resembles the former UN Ambassador) and Rev. Hosea Williams (Wendell Pierce, the familiar favorite from “The Wire” and “Treme”) break bread together or share a laugh greatly humanize people and events that often are portrayed as more mythic than real.

That one may take a moment to consider the historical events just cinematically witnessed—rather than groan at the uplifting, Golden Globe-nominated song, John Legend and Common’s “Glory,” playing over the final credits—says more about this film than anything.